Quite often, growing up in the shadow of a banyan tree can be quite inhibiting, however much you grow, and you shall always look small against the banyan. In a sense that was what happened to Sambhaji, the son of Sivaji. Growing up in the shadow of a powerful  father, who was a giant of a personality, meant Sambhaji, for all his achievements would never really match up to Sivaji. Add to it, his own addiction to sensual pleasures and drink, meant historians often judged him rather harshly compared to his father. One more reason why Sambhaji was often harshly judged by historians was his rather rash behavior that alienated some of the more powerful Maratha clans. In a sense Sambhaji had to bear the burden of his father’s legacy, and his own reckless attitude, it did not help either, that there was no love lost between him and his father. But it would be unfair to dismiss Sambhaji’s contribution to the Maratha Empire, in his own way he strengthened it, and carried on the good work of his father.
It was not an easy childhood for Sambhaji, born to Sivaji’s first wife Saibai, whom he also loved the most. He lost his mother at the age of 2, and grew up in the care of his grandmother Jijabai. When he was just 9, he was forced to live with Raja Jai Singh of Amber as a hostage, following the Treaty of Purandar, which Sivaji had signed in 1656. For some time, Sambhaji had to serve in the Mughal Court under Aurangzeb, and on May 1666, he was placed under house arrest along with his father. They managed to escape, hoodwinking the guards, hiding in fruit baskets.  Sambhaji was married to Jivabai, the daughter of Pilajirao Shirke, a powerful deshmukh of the Konkan region, and she changed her name to Yesubai after marriage. It was more of a political alliance, with the marriage giving Sivaji access to the entire Konkan region.  However Sivaji never really got along with his son, and for some time Sambhaji was put under surveillance in Panhala fort to curb his irresponsible behavior. Sambhaji escaped from there, and for some time, served with the Mughals before coming back to the Maratha camp.

Sivaji passed away in 1680 leading to a bitter struggle for the accession to the throne. Sambhaji’s step mother Soyrabai, wanted her son Rajaram to be the next ruler, and she connived with various Maratha nobles to install him on throne.  Sambhaji escaped from Panhala, and overthrow Rajaram, after taking control of both Panhala and Raigad forts. He was formally crowned the emperor on July 20, 1680 and threw Rajaram, Soyrabai along with Rajaram’s wife Jankibai into prison. He got Soyrabai executed on charges of treason and conspiracy, thus consolidating his hold on the throne.

One of Sambhaji’s first campaigns was against Burhanpur (currently in Madhya Pradesh), and a stronghold of the Mughals. Known for its riches as also its grand buildings, Burhanpur was an obvious target for the Marathas.  Bahadur Khan Kokaltash, Aurangzeb’s relative was the one in charge of Burhanpur, and Sambhaji tricked him into thinking that they would attack Surat.  The tactic worked, the Marathas under the command of  Hambirrao Mohite, attacked Burhanpur, and soon the city was captured, the treasury was looted, and the captives were executed.

In 1681, Sambhaji gave shelter to Aurangzeb’s rebellious son Prince Akbar, it would lead to one of the longest wars in Indian history between the Marathas and Mughals. Aurangzeb already furious over Sivaji checking his advances in the Deccan, now swore to destroy the Marathas forever.  After camping in Aurangabad, the Mughal Headquarters in the Deccan, Aurangzeb turned his attention to the Marathas. One of the first forts to be attacked was Ramsej, in Nasik district, a rather tiny fort but strategically important. Aurangzeb felt that being one of the smaller forts, this would be captured easily but a 5 month long siege, failed, with fierce resistance from the Marathas, and the Mughal army had to retreat. Aurangzeb was able to overcome Bijapur and Golkonda, bringing to an end the Adilshahi and Qutubshahi Empires there and also got two great generals Murrabkhan and Sarjakhan.

One of Sambhaji’s failed campaigns though would be against the Siddis of Janjira, against whom he led a 30 day siege in 1682. It was a fort even his father failed to capture in spite of an intense campaign.  Though Janjira was subjected to attack and suffered heavy damages, the Marathas could not penetrate the fort.  Sambhaji attempted a Trojan horse style trick, sending in his own men as defectors, however the plot was discovered, and the infiltrators executed. Sambhaji attempted to build a stone causeway to the island, but had to give it up when Aurangzeb attacked Raigad, forcing him to retreat.  Sambhaji however managed to capture the Portuguese held fort of Anjadiva but the Marathas were later repelled by a 200 strong force.  This led to another ongoing conflict between the Marathas and Portuguese who at that time, were allowing the Mughals to use their ports as also, provided regular supplies to them.  In late 1683, Sambhaji attacked the Portuguese, and captured many key forts, forcing the then Viceroy, Francisco De Tavara to undertake special prayers in the cathedral of St. Francis of Xavier. However a joint attack by Mughals and Portuguese forced Sambhaji to withdraw from Goa. 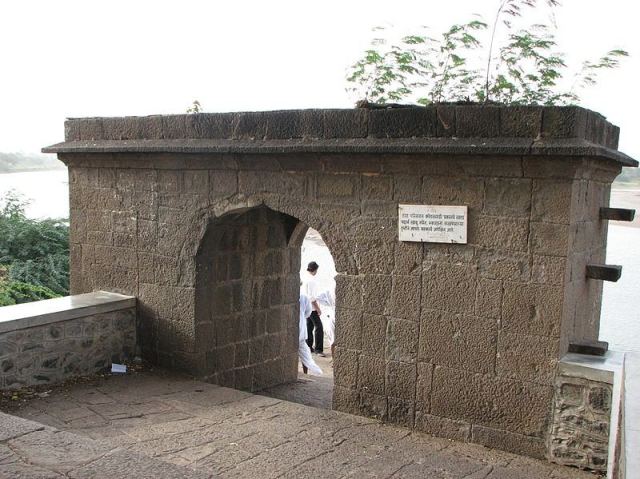 Sambhaji later had a treaty with the British, which enabled him to conquer, Pratapgadh and a series of forts along the Western Ghats.  His attempt to invade Mysore in 1681 would however end in failure much like that of his father’s earlier, when the ruler Chikkadevaraja Wodeyar, managed to repel back his army.  Chikkadevaraja later allied with the Mughals, and violated the treaties he had earlier signed with the Marathas.  The Battle of Wai in 1687 would be one of the biggest blows to Sambhaji, he lost his trusted commander Hambirao Mohite, and troops deserted him in large numbers.  It was a shattering defeat for Sambhaji, and to make matters worse, the Shirke clan who had defected to the Mughal side, spied on his movements, as he was on the run. Sambhaji was taken prisoner by the Mughals under Muqqarab Khan in February 1689, along with his friend Kavi Kalash.  Taken to Tulapur, Sambhaji along with Kavi Kalash, was humiliated in the worst possible manner, by Aurangzeb, first they were made to dress like jokers, insulted, paraded in chains and laughed at.  Aurangzeb promised amnesty to Sambhaji if he converted to Islam, and surrender his forts, the latter refused.  Following which Sambhaji was tortured to death in the most gruesome manner. His skin was peeled off using the Bagh Nakh(tiger claws), he was blinded, his tongue was plucked out and nails pulled out. Finally on March 11, 1689, Sambhaji was executed, by beheading him at Tulapur and his body thrown into the Bhima River.

It was the end of a great ruler, who never really received his due from history. The fact is that Sambaji had managed to keep the Maratha Empire intact, and carried on with most of his father’s policies. His death threw the empire into a period of chaos and confusion, and it was only the ascent of Chattrapati Shahu, Sambhaji’s son that bought it back to glory.

Blogger with a passion in movies, music,books and history. A techie by profession, and a writer at heart. Author of City of Victory a book on Vijayanagar Empire
View all posts by Ratnakar Sadasyula →
This entry was posted in Indian History, Marathas, Shivaji and tagged Marathas, Sambhaji. Bookmark the permalink.