Posted on September 26, 2015 by Ratnakar Sadasyula 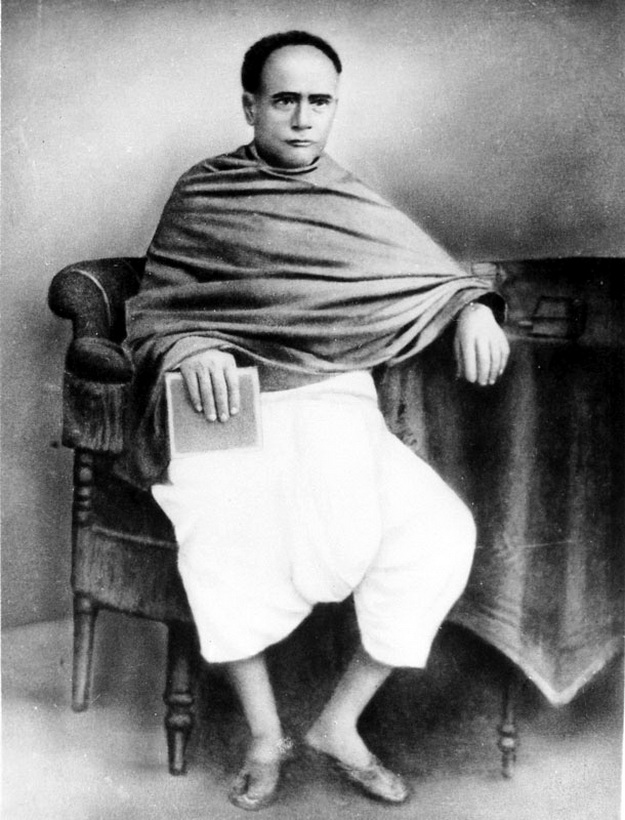 A young officer was travelling to another place to listen to a lecture, at a village, somewhere in Bengal, during the late 19th century. The train reached its destination and the officer was looking for a coolie to carry his luggage. A middle aged man approached him and said “Why do you need a coolie to carry such a small suitcase, can’t you carry it yourself and save the money?”. The young officer replied back haughtily “It is beneath my dignity to carry the suitcase, I am an educated person”. The middle aged man, then carried the young officer’s suitcase, and did not accept any money too. The young officer left for the venue of the lecture, and there he was stunned by what he saw. The “porter” who had carried his luggage in the railway station was none other than the person whose lecture he had come to attend to. The young officer felt remorseful and fell on the feet of the “porter”, asking for an apology. The “porter” told him smilingly “Son there is no harm in doing one’s own job, I only wanted to show you that”.

The porter here was Ishwar Chandra Vidyasagar, one of the icons of the Bengali renaissance. His actual surname was Bandopadhyaya, but he used his title Vidyasagar when he became a law Graduate. True to his name, he was truly an Ocean of Knowledge. There were so many facets to him, author, thinker, activist, social reformer. And above all a true humanist, one who reached out to the underprivileged, the faceless, the oppressed and downtrodden. A man who stood for the rights of the women, conducted widow remarriage and espoused the cause of women’s education. When one speaks of the Bengal Renaissance of the 19th century, this man would be one of it’s pillars and pioneers. Often it is said that circumstances shape a man’s character, and that was true about Vidyasagar.

Born to a Brahmin family in Midnapore district, in 1820, his childhood was that of extreme poverty. He received his education in the local village paatshala, where he learnt the basic reading, writing and arithmetic skills. There was an anecdote about how he mastered the English numbers by reading on milestones. He was a favorite student of Pandit Kalikantha Chatterjee who was also his mentor of sorts too. Along with his father he later migrated to Kolkata, where his father worked as a clerk in a metal store at Barobazar. Ishwar’s father wanted him to be a Sanskrit scholar, so that he could back to his native village and teach others too. However one of his relatives, Madhusudhan Bachaspati, urged him to let Ishwar study English and Sanskrit too, as it would pave the way for better opportunities. At his urging, Ishwar joined in Kolkata’s famous Sanskrit College, and applied himself to learning with total dedication, perseverance and patience. Being a brilliant student, he would often top the examinations, and received scholarships regularly too. These scholarships helped him financially in college and enabled him to complete his education too. In 1839 at a very tender age of 19, he completed his law degree, with mastery in many disciplines- Kavya( poetry), Alankara( Rhetoric), Vedanta, Smriti and Nyaya. Due to his outstanding performance he was awarded the title of Vidyasagar( Ocean of Knowledge).

He joined as Principal Lecturer in 1841 at Fort William College, primarily due to the secretary G.T.Marshall, who was impressed with his scholastic achievements. After working with Fort William, Vidyasagar joined Sanskrit College in 1846 as Assistant Secretary, which would be one of the glorious phases of his life. It was at Sanskrit College that he outlined a report recommending many changes in the curricula and education system. However due to differences with the then College Secretary R.C.Dutta, he resigned and worked for some time again with Fort William. The main bone of contention was the entry of students irrespective of caste. While Dutta, only preferred Brahmin students, Vidyasagar felt students should be admitted on basis of merit, irrespective of caste. Vidyasagar later rejoined Sanskrit College in 1849 and within 2 years progressed to the post of Principal. Consequently he went on to become Inspector of Schools in 1955, which is where he saw first hand, the miserable state of education. He saw the illiteracy in the rural areas of Bengal, as well as the exploitation of women from child marriage to lack of education. He realized that only education could uplift society and no society could develop if women were denied education. He opened around 20 Model schools and also set up schools exclusively for women. He personally met parents of girls, requesting them to send their daughters to schools. He encouraged many landowners, wealthy zamindars for setting up schools, as well as some from his own money. In effect he was known for his philanthropy, and would set aside a sum from his salary for donating to humane causes.

Oh poor India!…you think the woman whose husband dies immediately turns into a stone; she does not have sorrow anymore, cannot feel pain any more and all her senses of passions and sensualities diasappear without trace suddenly!But you well know that such notions are based on false pretences as evidence to the contrary abounds. Just think how these erroneous notions are poisoning this world.

Vidyagasar’s heart melted at the sight of women often exploited in the name of religion or rituals. Be it child marriage or the pitiable state of widows or their lack of access to education or property rights, he fought for it. Often at a great risk to his life, some of the more reactionary elements threatened to kill him, they saw him as a threat. He was not content with mere preaching, he called for discussion meetings, met Government officials, explained to them about the pitiable state of widows. When the conservative elements began to quote Hindu shashtras, Vidyasagar did his own research and proved there were no injunctions against a widow remarrying and that neither was polygamy acceptable. He published 2 volumes on widow remarriage, and another on polygamy, where he validated his stand with quotes from Hindu scriptures. In that sense Vidyasagar was different, he did not seek to attack Hinduism or do away with it altogether, he sought for reform within the tenets of Hinduism itself. He was more in the league of a Swami Dayananda or Vivekananda, who sought reform of Hinduism, within it’s own context. He walked the talk by marrying his own son to a widow. At least his efforts bore fruit, when the Government legalized widow remarriage on 26th July, 1856.

Another notable contribution by Vidyasagar was in the field of education, where he laid the foundation of modern Bengali prose and grammar in his landmark book Varna Porichoy. It was not for nothing that Rabindranath Tagore called him the Father of Modern Bengali Prose, his writing style, provided the base for future greats like Bankim Chandra Chatterjee, Tekchand Thakur etc. He translated famous Sanskrit works into Bengali, one of the most famous being Betal Panchavinsati, in 1847, a compilation of 2 5 tales around King Vikram and the Betal. Some of his other notable works are Mahabharata, Shakuntala, Seetar Vanvas( Exile of Sita), Banglaar Itihaas( A History of Bengal).

Having grown up in poverty, Vidyasagar knew what it meant, and this made him a great humanist and philanthropist too. Even as a student, when he was surviving on a scholarship, he would cook some kheer for the poor people on the streets. He donated most of his salary, to the needy, the poor people in his village, set up schools and healthcare centers for them. He was against casteism, opened doors of Sanskrit College to lower caste students, dined with untouchables and often nursed sick cholera patients by himself. He was also proud of his Indian roots, and immensely self-respecting.He never tolerated insults based on race. Once he went to meet the then Principal of Hindu College, Mr.Kerr, the latter sat with his feet on the table, a rather rude gesture. Later when Mr.Kerr visited Vidyasagar for some work, he did the same too. He was not the kind to tolerate any insult meekly.

Vidyasagar was a true colossus of his times, a man of integrity, honor who fought for the dignity of women, and the prevailing corruption in society then. He lived a modest life, simple in living, in manners of dress, but his thoughts were truly high. As a social reformer, as a humanist, as an activist, as a writer, an educationist, his contribution was truly remarkable. He would be one of the persons who drove the Bengal Renaissance one could say. Sadly the petty mindedness by his own family members, meant he had to severe ties with them, and he spent the last years of his life among the Santhal tribals. The great man passed away on 29th July, 1891, but not before leaving behind a great legacy that generations would forever be thankful for.

Blogger with a passion in movies, music,books and history. A techie by profession, and a writer at heart. Author of City of Victory a book on Vijayanagar Empire
View all posts by Ratnakar Sadasyula →
This entry was posted in Bengal Renaissance, Hinduism, Modern India, Social Reformers and tagged Bengal Renaissance. Bookmark the permalink.