Posted on October 11, 2015 by Ratnakar Sadasyula

1974, Patna– India was in turmoil, as a vast wave of discontent, swept the nation. The heady days of idealism were gone, as a nation came into terms with the loss of innocence. A nation that saw corruption, political skullduggery become the norm, of rising inflation, unemployment. And in that period, the face of the protest emerged against Indira Gandhi’s autocratic rule. Just 3 years earlier, Indira had swept to power, with the victory over Pakistan in the War, and the emergence of Bangladesh, fuelling her popularity. But the euphoria of the war victory had come off, the people were forced to deal with the harsh realities of life. Jayaprakash Narayan aka JP was the one giving a voice to the anger in the masses, as he led a huge procession on the streets of Patna. He had earlier led the Nav Nirman Andolan in Gujarat against the Chimanbhai Patel Government there. Just a couple of months he had asked for a Total Revolution from the masses and students, against the growing corruption. As JP led the procession in Patna, he was brutally lathicharged by the police. He was the target, and the police still continued raining blows on him, until another older man, shielded him, and took the blows, all the while escorting him to safety. The man who shielded JP from the police blows was Chandikadas Amrut Rao Deshmukh, better known as Nanaji Deshmukh. 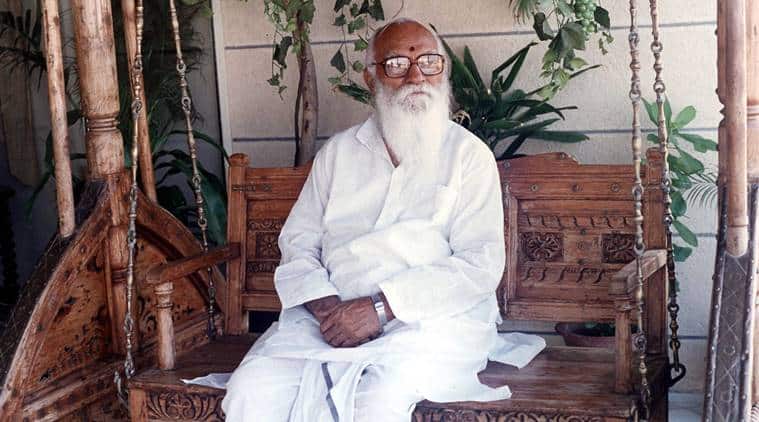 Two men, from two vastly different backgrounds- Jayaprakash Narayan and Nanaji Deshmukh. Both born on the same date, Oct 11, separated by a gap of 14 years. JP was from Bihar’s Saran district, his father was a lower Government official, and he later went on to study in the US too. Nanaji on the other hand, was from Maharashtra’s Hingoli district, lost his parents at an early age, had to struggle in his childhood, and later rose up the ranks of the RSS.  Their ideologies too differed, where JP was socialist, left leaning, Nanaji’s was more rooted in the Integral Humanism of the Jan Sangh. And yet on that fateful day in Patna, the paths of both these men would cross. It was destined to be so, if JP was the face of the Total Revolution, Nanaji was the brains behind it, as well as the Janata alliance that came later. JP took the Revolution to the masses, Nanaji organized the funds for it, coordinated it, and when the Government cracked down, during the Emergency, he oversaw the underground movement.

Nanaji was one of the men who built up the Jan Sangh in UP, brick by brick, when the then chief Guru Golwalkar had sent him there as an RSS pracharak to Gorakhpur. Arriving at a place, that had no funds, no base, no organization, Nanaji undertook the task of building the RSS from scratch, staying in Baba Raghavdas home, cooking meals for him. Within 3 years there were 250 Shakhas just in Gorakhpur itself, the also established the first Saraswati Shishu Mandir there in 1950. If BJP has a solid base in Gorakhpur, the reason is the foundation laid by Nanaji there. He was one of the trilogy, who spread the Jan Sangh in UP, the others being Deen Dayal Upadhyaya and Atal Bihari Vajpayee. Where Upadhyaya provided the ideological soul of the Sangh, Vajpayee took the message to the masses with his oratory, it was Nanaji who was instrumental in organizing and coordinating. Even when RSS was banned following the assassination of Mahatma Gandhi, it was Nanaji who kept things going, with publications from the underground.

On the other hand, JP’s trajectory was somewhat different. In a sense like Nanaji, he did have to work hard for his education. Nanaji sold vegetables as a young boy to support himself, while as a student in US, JP did a whole lot of odd jobs from picking grapes, washing dishes, as a mechanic at a garage to even a slaughter house. Unable to pay the fees at Berkeley, JP had to transfer from one University to another in US, before graduating in sociology finally. It was his experiences with the working class, that attracted JP to the Leftist ideology, especially the works of Marx and M.N.Roy. Even when he joined the Congress, during the Freedom struggle, JP was part of the Congress Socialist Group, a left wing group within the party, that included Ram Manohar Lohia, Ashok Mehta and was headed by Acharya Narendra Dev. A rebel with a derring do attitude, JP was arrested numerous times during the freedom struggle. One of the more inspiring anecdotes relates to the Quit India struggle, when he went underground, and had a daring escape from the Hazaribagh Central Jail, and walked to Gaya, along with his associate Yogendra Shukla whom he carried on his shoulders.

Though on the other side of the political divide, Nanaji Deshmukh, enjoyed a respect and support across the entire political spectrum. By 1957 he had established the Jan Sangh across UP, and it soon became a powerful political force in it’s own right. The first ever non Congress Govt in UP, was due to the efforts of Nanaji, who forged an alliance with Chaudhary Charan Singh and Ram Manohar Lohia, the first ever such grouping. Jan Sangh was to the Right, Conservative, while Lohia represented the more Left liberal aspect, and Charan Singh represented the farming community. Nanaji in fact outwitted Chandra Bhanu Gupta, considered a political giant, not once but thrice. He first managed to get Gupta’s nominee defeated in the Rajya Sabha, and then forging an alliance with other socialist groups defeated him twice in Lucknow and Maudaha later. Gupta had immense respect for Nanaji, whom he called a modern day “Nana Phadnavis”. He had a good relation with Ram Manohar Lohia, and the Jan Sangh- Socialist parties alliance, would be the first major opposition to the Congress party then. He also took an active part in Vinobha Bhave’s Bhoodan Movement.

At some point of time, these two great men would find their paths intersecting. And it came in 1974 during the Sampoorna Kranti( Total Revolution) launched by JP against Indira Gandhi’s misrule, the ever increasing corruption and rising inflation. JP was the movement’s visible face, but in the background was Nanaji coordinating every aspect of it, raising funds, sending the messages. As General Secretary of the Lok Sangarsh Samiti, Nanaji was the man who kept the underground movement, when Indira cracked down on it, during the Emergency. Nanaji was himself a wanted man, and managed to give the Government a slip during the Emergency, just getting out at the last moment. On June 25, 1975, Nanaji managed to get together a small group that consisted among others Subramaniam Swamy, M.L.Khurana, Ravindra Verma and Dattopant Thengadi. It was Nanaji who drew up the main plan for the movement during Emergency, of publishing underground news bulletins and pamphlets, setting up of underground cells, staging protest demonstrations, raising funds, helping the families of those detained. Nanaji himself was arrested later on June 29, 1979, but by then he had put the entire network into place, which ensured, that the underground movement would not die out. Both JP and Nanaji were arrested during the Emergency, but their spirit would be the guiding force for the movement. It was therefore not a surprise that when Indira lifted the Emergency and elections were held in 1977, Nanaji once again came to the forefront as the architect of the Janata alliance. Due to his immense political contacts, Nanaji managed to put together the formidable alliance, consisting of the Jan Sangh, Janata Party and other outfits. Nanaji himself won from Balrampur in 1977, and he played a key role in the Janata victory, coordinating the entire election effort. He however refused to take up a Cabinet minister position, stating he wanted to dedicate his life to social service.

“Singhasan Khali Karo ke Janata aati hai” thundered JP during the Ramlila rally of 1975, that quote was from the famous poet Ramdhari Singh Dinkar. JP was greatly influenced by Dinkar’s works, and the latter was a great admirer of JP, both these men shared a close bonding. It is said, that when JP was seriously ill, Dinkar had gone to Tirupati to pray for his health, saying that if there was a life to be taken it was his. Coincidentally, Dinkar passed away just when JP was recovering from his illness. JP was detained at Chandigarh, he however was later release due to a kidney problem was on dialysis for long. He managed to see his dream come true, of the Janata Government come into power, and Indira defeated. However he would be saddened by the way, the Janata leaders wasted the mandate with their internal squabbles and ego clashes.

Maybe it was for this reason, that Nanaji did not want to be a part of the Government. At a later stage in his life, Nanaji often remarked that he admired the Vanavasi Ram, more than the Raja Ram. He actually walked the talk, of retiring from politics, and dedicating his life to social service. Nanaji knew what poverty was, he had grown up with it, and the upliftment of the poorer sections was his life long aim. The Deen Dayal Research Institute was set up by Nanaji to promote grass roots level development in 1969. The motivation was a visit to Chitrakoot, a place that was holy due to it’s association with the Ramayana, where Lord Ram, had spent his exile in. The Chitrakoot that Nanaji visited though was a far cry from what he had read, steeped in backwardness, illiteracy and superstition. Moved by it’s condition, Nanaji made a resolve to change the face of Chitrakoot and also make it the base for his social reforms. “Har Haath ko denge Kaam, har Kheth ko denge Paane” ( Work to All, Water to every field) was the motto of Nanaji, as he did pioneering studies in anti poverty programs, cottage industry and rural development. Gonda in UP, and Beed in Maharashtra, two of the country’s most backward districts, was where Nanaji focused his efforts on.

And that led to the establishment of the Chitrakoot Grameen Viswavidyalaya, which he named after Mahatma Gandhi. It was India’s first ever rural University, and Nanaji was it’s first chancellor. The main aim was to provide students in rural areas, access to quality high education. The university has been doing great work in promoting courses on rural development, mass education and awareness among the rural people and sustainable development.

Neither JP nor Nanaji are around now, but their legacy and spirit will always continue to inspire. Two men who were true karmayogis, for whom power was not an end in itself. Two men, who led others to power, but did not accept it themselves. It was destiny, that two such great karmayogis were born on the same date.

Blogger with a passion in movies, music,books and history. A techie by profession, and a writer at heart. Author of City of Victory a book on Vijayanagar Empire
View all posts by Ratnakar Sadasyula →
This entry was posted in Emergency, Great Indians, Modern India and tagged Emergency, JP, Nanaji Deshmukh. Bookmark the permalink.