Posted on December 17, 2018 by Ratnakar Sadasyula

One of the most significant events of the freedom struggle was the Kakori conspiracy carried out on August 9th, 1925. It was the time the Hindustan Republican Association founded by Ram Prasad Bismil,  was in dire need of funds for carrying out it’s objective of an armed revolution. And that was the time, they came up with this conspiracy. Kakori was the station between Shahjahanpur and Lucknow through which the No 8 Down passed, carrying the money bags of the Treasury. Apart from getting the funds for the organization,  it was also intended to get it noticed by the common people, and give a jolt to the British. The mastermind of the operation were Bismil and Ashfaqullah Khan. One of the main persons in that conspiracy was Rajendra Nath Lahiri, born on June 29, 1901 in the village of Mohanpur, Pabna district( now in Bangladesh) to Kshiti Mohan Lahiri and Basant Kumari. At the time of his birth, his father was in prison along with his elder brother, for participating in the activites of the banned Anushilan Samiti. Imbibed with the spirit of patriotism when he was just 9 years, he went to his maternal uncle’s home in Varanasi. His education was primarily in Kashi, and he joined MA( History) in BHU, this was the time, when he met the famous revolutionary Sachindranath Sanyal. Recognizing the patriotism, revolutionary spirit and passion for freedom in Rajendranath,  Sachindranath  made him the editor of the magazine Banga Vaani,   as well as the coordinator and arms in charge for the Varanasi branch of the Anushilan Samiti.

His dedication to the cause, ensured Rajendranath got an invite to the secret meetings of the Hindustan Republican Association too. His love for Bengali literature and reading made him open a small library in the name of his mother. He was also in charge of the Bengali Sahitya Parishad at BHU, and he also was the one who came up with the handwritten letters of the revolutionaries in Kashi.  His endeavor was to ensure that the revolutionaries in Benares, could express their thoughts through their handwritten letters.

When the Kakori conspiracy was planned, he played an important role. When Ashfaqullah Khan was initially sceptical of the proposal, feeling it would bring undue attention to the revolutionaries. it was Rajendranath Lahiri, who stood ground, and forced Ashfaq to reconsider. As per the plan, he was the one who pulled the chain at Kakori station on August 9, 1925, giving signal to Bismil, Ashfaqullah, Chandrashekhar Azad and 10 others to rob the bags containing the money.

After the Kakori incident, Bismil sent him  to Bengal to learn bomb making, which is where the Dakshineshwar incident took place. He had just gathered all the material necessary for making the bombs, when due to the carelessness of another revolutionary, a bomb went off. The loud explosion alerted the police, and Rajendra was arrested along with 9 others. Sentenced to 10 years in prison, the British Govt however filed a lawsuit against the revolutionaries for the Kakori conspiracy.  Accusing them of launching war against the British crown, and looting the treasury,  the revolutionaries were declared guilty through fabricated evidences and false witnesses. Rajendranath was bought to Lucknow and put in the prison there.

In spite of many appeals and arguments, the British Government refused to reconsider it’s stand and Rajendra Nath Lahiri along with Bismil, Ashfaqullah Khan and Roshan Singh were sentenced to death by hanging. While the others were to be hanged on December 19, Lahiri was to be hanged, 2 days earlier than them at the Gonda district jail. 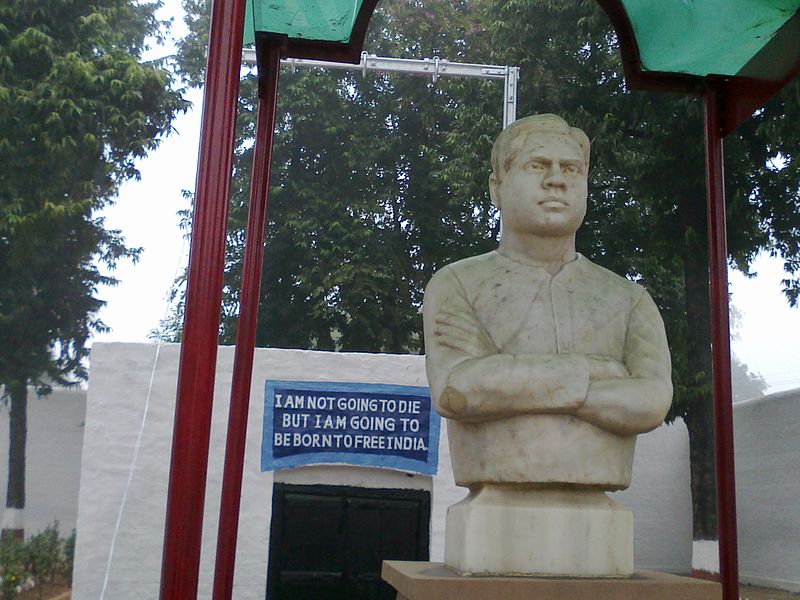 December 17, 1927- The day he was to be hanged, Rajendranath Lahiri was doing his usual exercises in the morning. When the jailor asked him, why he was doing so even on his last day, Lahiri replied.

Jailor Saab, I am a Hindu, I believe in rebirth.  I want to be born with a physically fit body in my next birth, so that I can complete my unfinished tasks. Today is the most glorious day of my life,  how can I forgo my daily routine. I am not dying, but I shall once again be reborn in a free India.

Rajendra Lahiri, went to the gallows with a smile on his lips, kissed the rope, shouted Vande Mataram .Another great son of Bharat, had given up his life for the country’s freedom.

Blogger with a passion in movies, music,books and history. A techie by profession, and a writer at heart. Author of City of Victory a book on Vijayanagar Empire
View all posts by Ratnakar Sadasyula →
This entry was posted in Uncategorized. Bookmark the permalink.