Posted on September 10, 2019 by Ratnakar Sadasyula

Ettayapuram is a small town in Tamil Nadu’s Thoothukudi district, one of the well known Zamindari estates ruled by Telugu Nayaks hailing from Chandragiri. Founded in 1567, by Ettappa Naicker, after whom the place is named, it gained an infamy of sorts, when  it’s ruler sided with the British against Veera Pandya Kattabomman, giving rise to the term Ettappan meaning traitor in Tamil. The town was famous for Umaru Pulavar, a well known Muslim poet, and Mutthuswamy Dikshitar was patronized in his final years by the ruler. And the town’s most famous resident was born here on December 11, 1882 to Chinnaswami Subramania Iyer and Lakshmi Ammal. 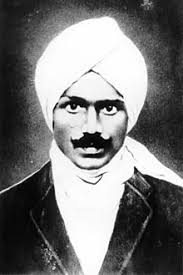 Chinnaswami Subramania Bharathi, or better known as Mahakavi Bharatiyar, a writer, a revolutionary, a freedom fighter, a nationalist and thinker. A polyglot fluent in 14 languages, and one of the most prolific writers in Tamil, who wrote on a variety of themes. One of the pioneers of modern Tamil Literature, who used simple language to reach to the masses, and a metre called Nondi Chinu in most of his works. His proficiency in various languages earned him the title of Bharati, when he was just 11, meaning one blessed by Saraswati Devi.

Losing his mother at the age of just five, he was bought up by his father who wanted him to become a lawyer.  Bharatiyar however was more poetically and musically inclined, and he passed out from the MDT College in Tirunelveli. Losing his father at 16, he later married Chellamma, who would be a lifelong companion and source of support to him. 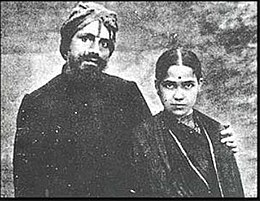 Bharati’s spiritualism and nationalism, was a result of his stay at Varanasi, where he went for higher studies.  It was the time of the freedom struggle, and Bharati was deeply influenced by it’s values. He learnt Hindi, Sanskrit and English there, and grew a beard, began to sport a turban, influenced by a close Sikh friend of his. Returning to Ettayapuram in 1901, he spent some time as the court poet of the Rajah there. He also worked as a Tamil teacher at the Sethupathy High School in Madurai in 1904. It was during this time,  that he felt the need to be informed of the much larger world outside, and the events that were happening.

He joined as Assistant Editor in Swadeshimitran, a Tamil daily, however it was his meeting with Bhagini Nivedita in 1905 after returning from the Benares Congress session, that would influence his outlook.  It was Nivedita who urged him to work for the cause of women’s education. Bharatiyar saw women as Shakti, who would build a new society along with man. Along with Bal Gangadhar Tilak his political guru, Nivedita would be another great influence on him. He soon became an active member of the Congress, taking part in the Kolkata session under Dadabhai Nauroji which called for Swaraj and boycott of British goods.

He also started to edit the English  weekly India and the Tamil newspaper Bala Bharatham with M.P.T. Acharya, another great freedom fighter, who would later work with Veer Savarkar in London. Bharatiyar used the media to inculcate nationalist thoughts in the masses through his poems and articles.  From devotional hynmns to nationalist poems, from deeply philosophical works on the relation between God and Man, to songs on the French and Russian revolutions, Bharatiyar’s output was prodigious. During the historic Surat session of Congress in 1907, when the split occured between Moderates and Extremists, Bharatiyar along with VO Chidambaram Pillai and Varadhachariar, openly supported the Tilak group.

Pillai was arrested by the British in 1908, as also the propretior of the journal India. Facing the prospect of arrest, Bharatiyar fled to Pondicherry, then under French rule, living in exile, and resumed his writing. He edited the weekly journal India, a Tamil daily Vijaya, Bala Bharatam, a monthly and Suryodayam a local weekly. The British struck back stopping remitances,  letters to those outlets, both India and Vijaya were banned in 1909.

It was during his exile in Pondicherry that Bharatiyar came into contact with Aurobindo, and leaders like Lala Lajpat Rai and VVS Aiyar. He assisted Aurobindo in publication of the journals Arya and Karma Yogi. And he also learnt Vedic literature extensively during this time. It was in this period, 3 of his greatest works were written, Kuyil Pattu a romantic poem ,  inspired by John Keat’s Ode to a Nightingale. Kannan Paatu a series of poems on Krishna, and his classic  Panchali Sabatham, which is about the events leading to Draupadi’s humilation at the Kaurava court, and the pledge she takes to destroy the Kuru royal family.  Some critics, saw Panchali Sabatham as an allegory to the freedom struggle too, with Kurukshetra as the freedom struggle, waged by the Indians( Pandavas) against Kauravas( British).

He also translated the Bhagavat Gita, Patanjali’s Yoga Sutra and many Vedic hymns into Tamil. Bharatiyar once again tried to make his entry back to India, but was arrested at Cuddalore in 1918. He spent three weeks in the Central Prison at Cuddalore, before being released on the intervention of Annie Beasant and CP Ramaswamy Iyer. He resumed his editing of Swadesimitran in 1920 from Chennai. However the continous imprisonments took a toll on his health, and financially too he had fallen on hard times.

He spent his last years at Triplicane Chennai, where he continued to write and speak to the people. His last speech was at  the Karungalpalayam Library in Erode, on Man is Immortal.  He used to visit the Parthasarathy Temple at Triplicane regularly, and on one such visit, he was attacked by the temple elephant, whom he used to feed regularly. Though he survived with injuries, his health began to deteriorate and on September 11, he passed away.  The Mahakavi whose poems aroused the nationalist feelings of masses, who fought against British rule, was no more. Sadly only 14 people attended the funeral of the great man, as he died unmourned and in poverty.

Bharatiyar is considered as one of the pioneers of modern Tamil literature, with his usage of simple language, and also introduced many new literary techniques. It was hard to categorize Bharatiyar, his poetry combined both the classic and contemporary elements.  While a reformist, he was deeply rooted in traditional Hindu philosophy and tradition. He wrote on topics as diverse as Indian nationalism, love songs, children’s poems, as well as poems on great leaders like Tilak, Lala Lajpat Rai. He even translated speeches of Aurobindo, Swami Vivekananda and Tilak to Tamil.

Even if Indians are divided, they are children of one Mother, where is the need for foreigners to interfere?

He felt passionately not just for India’s freedom,  but also it’s future.  He wrote about the need for a strong defense, a vibrant shipping sector, universal education and a strong industry.  He was against casteism, he performed Upanayanam for a  young Dalit boy, and spoke of bringing them into mainstream.

I am a 40 year old Blogger with a passion in movies, music,books, Quizzing and politics. A techie by profession, and a writer at heart. Seeking to write my own book one day.
View all posts by Ratnakar Sadasyula →
This entry was posted in Indian Freedom Struggle, Modern India, Tamil Nadu. Bookmark the permalink.