Posted on January 31, 2020 by Ratnakar Sadasyula

Umberkhind Pass basically connects to the Konkan area, a popular trekking route in Maharashtra. One of the narrowest passes, in the Western Ghats, separating Lohghad from Visaghad running parallel to Mumbai-Pune rail route.

This pass would however be remembered for a historic battle fought here on February 3, 1661, when Chattrapati Shivaji defeated Kartalab Khan, the right hand man of Shaishta Khan, one of the most decisive victories ever, that further consolidated his position and strengthened the Marathas. 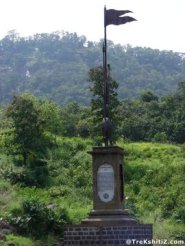 Kartalab Khan was Shaishta Khan’s right hand man, whom Aurangzeb specifically sent to crush Shivaji, He led an army of 20,000 troops, however while he was adept at open plains warfare, he had no experience dealing with guerilla warfare which the Marathas used. His experience was primarily in the open plains of North India, that too against armies made up mostly of mercenaries. Here he was dealing with the Marathas in absolutely hill territory, who were ideologically driven by the Haindavi Swarajya dream.

Kartalab Khan made his way via Chinchwad, Talegaon, Vadagon, if you are from Pune you would be familiar with the terrain, and then made a left turn towards Lohagad Fort, that stood on the border between Konkan and the Deccan Plateau. His  plan was to travel from Lohagad to Visaghad, make an ascent to Umberkhind, and then make his way to the Konkan. His original plan was to travel via the Bor Ghat( now the Khandala Ghat), which actually was much more wider.

Fact is had Kartalab, taken the route via Bor Ghat, it would have been a much more tougher battle for Shivaji, as that was quite wide and open. In fact this is the reason why British laid the railway line through Bor Ghat, between Mumbai and Pune. One aspect of Shivaji’s campaigns not that well known, is that he had an awesome intelligence network, which is how we actually managed to win so kany battles. He had spies, who would track every moment of the enemy, keeping him always one step ahead.

It was not just the intelligence gathering, Shivaji also used the tactics of disinformation really well to fool the enemy. And he did so here, feeding Kartalab Khan information through his spies, that Shivaji was at Pen, in Raigad district, throwing him off track. The disinformation strategy worked, it made Kartalab Khan change his original plan of travelling via Bor Ghat, to Umberkhind Pass, assuming that Shivaj was at Pen, when in fact he was waiting there. A trap had been set and Kartalab walked straight into it.

The trap was the pass of Umberkhind where Shivaji and his 1000 strong men were hiding in wait, equipped with arrows, boulders, rifles. The thick dense forests, made it easy for the Marathas to camouflage themselves, from the Mughal soldiers.Shivaji waited for Kartalab and his army to descend the pass. The Marathas slowly surrounded the Mughal Army without them even being aware of it. It was a perfect trap, and by the time they reached the base, they were surrounded from all sides.

The Marathas began their attack by rolling boulders on to the hapless Mughal Army, And they were surrounded on all sides, even worse they could not even see them, due to the thick forest cover. It was a rout for the Mughal army, as the Marathas pounced on them. Within 2-3 hours the Mughal Army was routed, Kartalab Khan had to sue for peace. Once again a 1000 strong Maratha Army under Shivaji Maharaj had defeated a much larger Mughal force of around 20,000, just using smart strategy and tactics.

Kartalab Khan fled from the battle field, leaving his entire armory to Shivaji, which gave the Marathas more firepower. Not mention large amounts of gold and jewelery. And some of the Mughal soldiers too switch sides to Shivaji.

To put it into perspective Umbarkhind is 2200 feet above sea level, you would need a descent of 300 feet to Tugaranya, which was surrounded on all sides by forest and hills. And Kartalab Khan was actually planning to fight Shivaji at this place. Shivaji knew the Sahayadris and Western Ghats like the palm of his hand, he grew up there. What Kartalab Khan tried was equivalent to bearding the lion in his own den, that too a rather ferocious lion which had the fight in him.

Blogger with a passion in movies, music,books and history. A techie by profession, and a writer at heart. Author of City of Victory a book on Vijayanagar Empire
View all posts by Ratnakar Sadasyula →
This entry was posted in Indian History, Marathas, Medieval India, Shivaji, Uncategorized. Bookmark the permalink.