Posted on October 30, 2018 by Ratnakar Sadasyula

Of the many discriminatory laws that the British enacted, during their reign, one of the most notorious ones was the Criminal Tribes Act of 1871. It was ostensibly created to control criminal groups like the Thugees, however it ended up as an effective measure to penalize communities and tribes, whom the British believe mutinied against them in the Great Revolt of 1857. Basically, the tribes that were classified under CTA were mainly nomadic ones, making a living as petty traders, gypsies or in the hills, with no fixed location.  To the British, their lifestyle did not seem civilized, and they felt those tribes were crime prone. By 1920, the scope of the Act was widened further, as more and more castes began to be bought into it’s ambit. In Madras Presidency, this act was widely used in the Southern part, primarily Madurai , Tirunelveli and Ramnad, where communities like Thevars, Maravars were bought under this draconian act. One man however decided to rebel against this unjust act, that classified any one who did not confirm to British ideas of civilization as criminal. 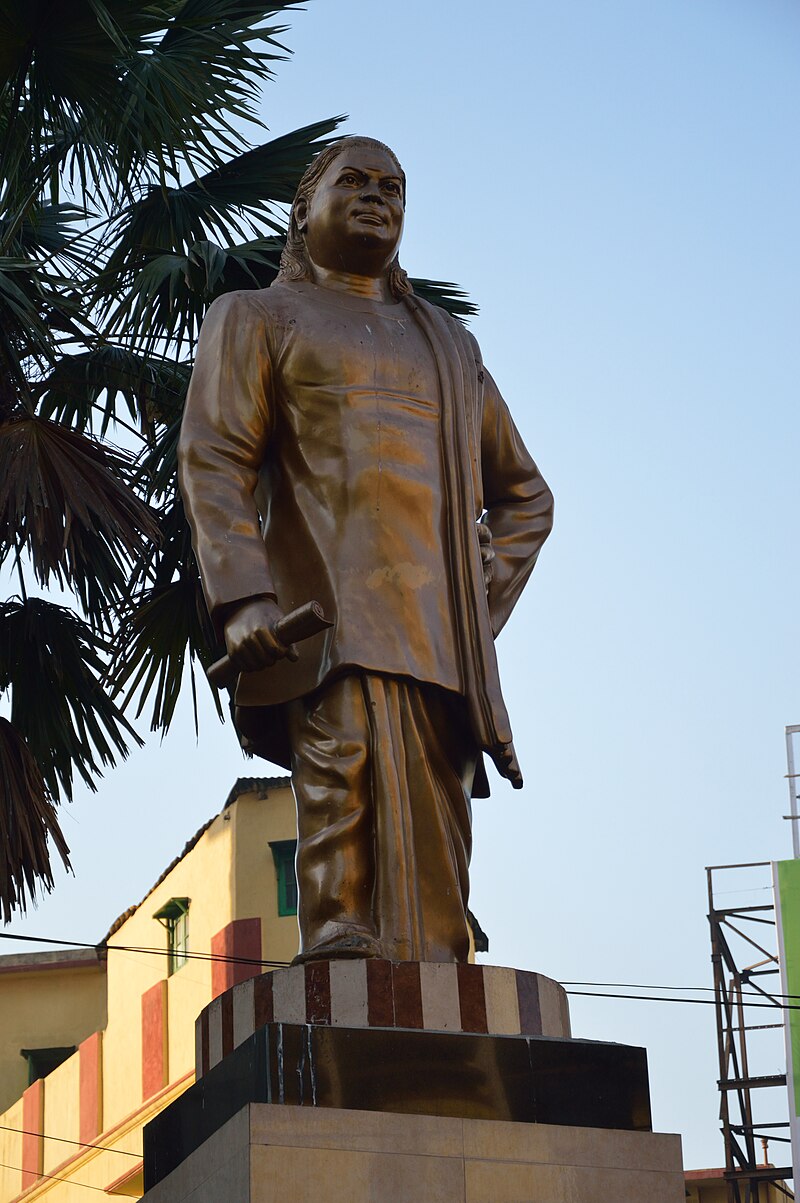 Born in the village of Pasumpon in Ramanthapuram district, to  Ukkirapandi Thevar and Indiraniammal on Oct 30, 1908. He grew up under the care of his maternal grandmother. after his mother passed away when he was small. He was mentored by family friend Kuzhanthaisami Pillai, who arranged his schooling too. He however had to drop out of studies, due to a plague epidemic and an ongoing legal case, over inheritance.

Pasumpon came into the limelight with his unending struggle to get the Criminal Tribes Act repealed. When Maravars in 19 villages near Appanad, were forcibly registered under the Act,  he led a massive campaign, urging people to defy it. However the British Govt, instead of removing the Act, enlarged it’s scope further, making Pasumpon resort to even stronger protests. He led a strident campaign against the Act, highlighting it’s discriminatory nature against certain communities in South. However he got no support from the Justice Party ruling Madras Presidency then, leading to a long time animosity with them.

Fed up with the Justice Party, Pasumpon joined the Congress, hoping for it’s assistance in his fight against the Act. He toured the Southern districts, strengthening the Congress party in those areas, with his hard work and dedication. With his oratory and charismatic presence, he soon emerged as a formidable force in Tamil Nadu, especially the Southern part. However when he wanted to contest for President of Ramnad District Board, some Congress leaders led by Satyamurthy opposed him. Frustrated with the internal bickerings in Congress, Pasumpon later joined the Congress Socialist Party.

During the 1937 elections to the Madras Presidency, Pasumpon began to mobilize the Thevar and Mukalathor youths against the Justice Party.  So worried was the Justice Party, that they forbade him to travel outside Ramanthapuram district. He however had the last laugh, defeating the Raja of Ramnad, who was the Justice Party candidate, by a landslide. Though the Congress formed the Government in Madras Presidency, Rajaji as Chief Minister, made no effort to repeal the CTA.  He also took active part in trade union activities,formed the Pasumalai Mahalakshmi Workers Union, around the same time. He led a long strike against management of Madura Knitting Company, forcing them to accede to the worker’s demands, though he himself was jailed for 7 months.

One of Netaji’s closest associates, Pasumpon supported him during the 1939 Tripura Congress President election.  Gandhiji put up his candidate, B.P.Sitaramaiah, for post of Congress President, but Netaji won the election hands down. He played a significant role in Netaji’s win, mobiling all the South India votes for him, in that Presidential election. When Netaji was forced to resign as Congress President, he quit the party and founded the Forward Block on June 22, 1939.  Pasumpon, too quit  along with Netaji, and joined the Forward Bloc, he would be one of the co founders. In a way Pasumpon was already disappointed by the Congress leader’s indifference towards repealing the Criminal Tribes Act.

When Netaji visited Madurai on Sept 6, 1939, it was Pasumpon who organized a massive rally for him there. Matter of fact, he became Netaji’s representative down South, mobilizing youth, to volunteer for the INA. To date, Netaji and INA is still popular in most Southern districts of TN, and that was very much due to Pasumpon who moblized support.

“I would be there at entrance of Meenakshi Temple, those who dare prevent Dalit’s entry, can meet me here”

When restrictions on Dalit entry to Hindu temples was removed, Pasumpon was the first to support it, and he actually led many temple entry movements. His rising popularity among the masses, made Congress leaders worried about Pasumpon Thevar, as also his militant nature. He was jailed for 18 months in Trichy, with a criminal case registered against him, widespread protests happened against his arrest. Again in 1945, when Rajaji wanted to contest for Congress president post in Tamil Nadu, most of the members were against him.  In 1946, Pasumpon was elected from Mudukulathur, and the CTA too was repealed, his struggle had borne fruit now.

When Congress party in Tamil Nadu, expelled most dissenters, Pasumpon became the President of the Forward Bloc in TN, which he would lead. So popular was he, that in the  1952 General Election, he managed to win both Arupukottai LS seat and Mudukalathur Assembly seat, inspite of Congress sweeping the rest of the nation under Nehru. When Congress fell short of a majority in the Tamil Nadu assembly, Pasumpon tried forming a non Congress coalition with Left parties, it however failed. He once again won the General Elections in 1957 from Arupukottai LS and Mudukulathur assembly seat.  However there was a split in the Forward Bloc itself, with the section headed by Sheel Bhadra Yajee and Mohan Singh, merging with the Congress.

However with Pasumpon deciding to enter Lok Sabha, a by election was necessary for the Mudukulathur Assembly seat, that would spark off a major riot.  While the Maravars supported the Forward Block, the Pallars supported the Congress. Sasivarna Thevar of Forward Block, won the poll, and the victory celebrations triggered off caste clashes between the Maravars and Pallars, which soon spread like wildfire.  Returning from Delhi,  Pasumpon took part in a Peace Conference on September 10, 1957 along with Sasivarna Thevar and Velu Kudumban, a Pallar, that managed to broker a peace between the warring communities.

He however was arrested for the alleged murder of Emmanuel Sekaran, a Congress leader, was later acquitted and released.  In 1959 , after his release from prison, Pasumpon put together a coalition of Forward Block, Left parties and ensured Congress lost for the first time in Madurai muncipal polls. However his health began to deteriorate and four years later he passed away on Oct 30, 1963, yes the same date on which he was born.

Pasumpon provided a genuine Non Congress ideology, that was founded on spiritualism, nationalism, a true Dharmic-Indic alternative.  Though belonging to Forward Bloc, he was pretty much a Dharmic, spiritual person and was against Soviet version of Marxism. He never got along with the Leftists, due to their rejection of Netaji and their anti Hindu stand. He  was equally critical of the Dravidian movement, condemned their secessionist tendencies.  A true nationalist, and a Dharmic, he could never support the Leftists, nor the Dravidian movement.  He was more spirutually inclined, never really got along with Marxists, nor was he in favor of the Dravidian rationalism kind. His Dharmic, Indic outlook was at total odds with the Dravida Kahagam’s ideology, and they never got along. His passing away, created a void in the non Congress space in TN, that was fillled up by the Dravidian parties. Pasumpon Thevar is no more, but his legacy, and his struggle to get the CTA repealed, would forever be remembered.

I am a 40 year old Blogger with a passion in movies, music,books, Quizzing and politics. A techie by profession, and a writer at heart. Seeking to write my own book one day.
View all posts by Ratnakar Sadasyula →
This entry was posted in Indian Freedom Struggle, Indian National Army, Tamil Nadu, Uncategorized. Bookmark the permalink.