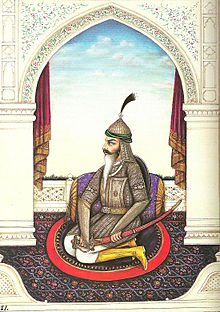 “Hari Ragla” two words that struck terror in the hearts of Afghans.  Two words that made Afghan mothers put their kids to sleep with. Two words that just about summed up the man, who was a terror to the Afghans, dealt a death blow to their plans of territorial expansion.  A man who stood out like a colossus in the court of Maharaja Ranjit Singh, that itself was a galaxy of stellar personalities. A man who even in death, frightened the Afghans, to the extent they fled from the battlefield than face him.

Hari Singh Nalwa, the commander in chief of the Sikh Khalsa army, Maharaja Ranjit Singh’s sword arm. The man who conquered most of  North West India from the Afghans, expanded the Sikh empire beyond the Indus river, right up to the Khyber Pass.

This legendary hero was born in Gujranwala( now in Pakistan), in 1791, to Gurdial Singh Uppal and Dharam Kaur. Raised by his mother, after his father passed away when he was just 7,  he took the Amrit Sanchar and was initiated as a Sikh, when he was 10 years old. At the age of just 14, he impressed Maharaja Ranjit Singh, with his skills in horse riding and shooting, as well as his intelligence.  Ranjit Singh appointed him as a personal attendant. And soon he rose within the ranks of the Army to become a Sardar, commanding 800 horses and footmen. In 1804, he killed a tiger that attacked him with his bare hands, earning the epithet of Bagh Maar.

Hari Singh Nalwa fought around 20 major battles, and each time he inflicted a crushing defeat on the Afghans.  His first major battle was at Kasur in 1807, a strategically significant fort near Lahore, that was a major obstacle for Ranjit Singh.  He showed exemplary courage in the battle, and captured the fort, was granted a Jagir in recognition.  At just 17 years old, he was given indepdendent command of the army, and captured Sialkot from it’s ruler Jiwan Singh, after an intense battle.

He however emerged as a formidable warrior with the Battle of Attock in 1813,  the first major victory of the Sikhs against the Afghans.  Attock was strategically important, a replenishment point for armies crossing the Indus. The campaign to capture it was led by Dewan Mokham Chand, one of Ranjit Singh’s trusted generals,  and Hari Singh took active part in the battle. It was the first major victory for the Sikhs over the Durranis, and along with Attock, the adjoining regions of Hazara-i-Karlaugh, and Gandhgarh too became part of the Sikh Empire. However the attack on Kashmir in 1814, under Maharaja Ranjit Singh himself failed due to the bad weather, delay in arrival of reinforcements, and treachery of the Rajouri chieftains.

In 1816, once again Nalwa took part in the expedition to capture Mahmudkot( now in Pakistan),  a strongly fortified fort. Ranjit Singh approached it from the southern end,  Nalwa along with Diwan Chand, Fateh Singh Ahluwalia, fought in another bitter battle, that led to the conquest of the fort, along with Khangarh and Muzaffargarh. In 1818, Nalwa was instrumental in the capture of Multan, after a fierce resistance from Muzaffar Khan and his sons. When a bitter civil conflict broke out in Peshawar, with Kamran Shah, killing their Barazkai Vazir Fateh Khan, the Sikhs took advantage of it, and captured the city for the first time.

Nalwa was deputed as Governor of Peshawar to keep it under control, he later bought the territories of Mitha Tiwana and Nurpur under the Sikh empire. In April 1819, the Sikhs once again attacked Kashmir, under the command of Kharak Singh, and Nalwa leading the rear guard. After a fiercely fought battle on July 5, 1819, the Sikhs conquered Kashmir. It was a major victory for them, and for 3 nights the cities of Lahore and Amritsar were illuminated. Nalwa later took charge of Kashmir as Governor,  and in 1821 put down a revolt  by the Khakha chief Ghulam Ali.

His most spectacular success, came in Pakistan’s Hazara region at the Battle of Mangala in 1821. Crossing the Kishenganga river at Muzaffarabad with 7000 foot soldiers, he traversed the treacherous mountains, he reached Mangala.  It was now occupied by the Jaduns chief, who controlled the entire Damtaur region, who demanded a tax on all the goods Nalwa as carrying for safe passage. When he refused to pay up, all the tribesmen in that area surrounded and attacked him.  Against a combined tribal force of 25,000, Nalwa stormed their defences, and routed em, inspite of being outnumbered. In the meantime, the Sindh Sagar Doab, controlled from Mankera, by Nawab Hafiz Ahmed Khan, the Afghan governor.  After celebrating Dussehra, Ranjit Singh mounted his attack on this region in 1822,  and Nalwa met him on the banks of the Jhelum river. Mankera was surrounded by around 12 forts, which were built by Hafiz Ahmed’s predecessor, Nawab Mohd Khan. The Sikhs conquered these 12 forts, and only Mankera was left standing.  Leading  an army of 3 units, Nalwa stormed Mankera from the western side, the fort itself was built of mud and burnt brick,  surrounded by a dry ditch. After a 25 day long siege of the fort, Nalwa, finally managed to capture it and the Nawab accepted defeat.

In the meantime, Azim Khan, seeking revenge over the loss of Peshawar and Kashmir, attacked with a huge army at Naushera in 1823. Nalwa captured the  Akora Khattak fort first and then managed to secure the Yousufzai stronghold of  Jehangira, after a fierce resistance. Finally in a very intense battle on the banks of the Landai River, Nalwa along with Ranjit Singh, the Gurkha commander Bal Bahadur, inflicted another crushing defeat on the Afghans. It was a total rout and Nalwa chased them all the way to the Khyber Pass.

With the Afghans now totally dispirited, by Nalwa’s repeated attacks on them, hope came in the form of Sayyid Ahmad, belonging to the Yousufzai tribe.  Ahmad, led the Yousufzai revolt, and Ranjit Singh sent Budh Singh Sandhanwalia to subdue it. The Barakzais of Peshwar, though allies with the Sikhs, were in cahoots with the Yousufzais.  Sayyid arrogantly declared that he would first capture Attock, and then march on to Naushehra.  Nalwa stood guard at Attock, ensuring that he would hold Sayyid at bay till reinforcements came in.  On 14 February, 1827 one of the bloodiest battles ever was fought at Saidu, with cries of ” Allah Ho Akbar” and “Jo Bole So Nihal” renting the air.  For around 2 hours it was total carnage, as the Sikhs and Afghans clashed in one of the bloodiest conflicts ever. Despite much larger numbers, the Afghans were routed by the Sikhs, who went in hot pursuit of them, and Sayyid himself had to flee to the Yusufzai mountains. 8000 Sikhs under Nalwa, routed a much larger Afghan force of around 150,000, and the victors were feted at a large ceremony in Lahore.

In 1835, Dost Mohammed took charge of Kabul, and defeating Shah Shuja at Kandahar, gave a call for Jihad, and set off on a large campaign to wrest back Peshawar from the Sikhs.  On the 10th of May 1835, Nalwa along with Raja Gulab Singh, Monsier Court,  Sardar Tej Singh among others,  led the campaign, and encircled the Afghans in a semi circle. Ranjit Singh however wanted to avoid battle, and sent his Vakils to negotiate with Dost Mohammed.  He managed to win over Dost Mohammed’s step brothers Jabbar and Sultan to his side, rendering him helpless. Knowing his game was up, Dost Mohammed fled to Kabul, via the Khyber Pass,  was a total rout for him.

In October 1836, Nalwa attacked the village of Jamrud, right at the mouth  of the Khyber Pass.  The Misha Khel Khyberis, the main chieftains of this village, were known for their markmanship and rebellious nature.  Nalwa however managed to subdue them,  and began to strengthen the existing fort, the Sikh empire now extended all the way to Khyber Pass.  Nalwa did not rest on his laurels however, he attacked the rebellious Yusufzai territories and subdued them, occupying Panjtaar.  The chief Fateh Khan, lost all his territories and had to sign an agreement to pay tribute.

Dost Muhammad was now truly alarmed, the Sikhs were right at the mouth of the Khyber, and nothing could really stop them from taking Jalalabad and Kabul. With the Afghans totally helpless before Nalwa’s onslaught, nothing really seemed to stop him reaching all the way up to Kabul. Around the same time, Ranjit Singh’s grandson was getting married in March 1837, most of the troops were attending the wedding. Nalwa though was at Peshawar, as he was suffering from fever. Taking advantage of the occasion, Dost Muhammad, ordered the Afghans to capture the forts of Jamrud, Peshawar and Shabhqadar. Nalwa’s lieutnant, Mahan Singh was in charge of Jamrud, with just 600 men and very limited supplies. When the Afghans attacked and besieged the fort, Nalwa had to leave Peshawar for the rescue of his men.  Though the Sikhs were totally outnumbered, Nalwa’s presence once again gave them the strength, and the Afghans scattered on his arrival. Nalwa however was injured badly in an ambush attack, and had to be carried inside the fort. He told his men not to get the news out of his impending death to the Afghans, till reinforcements arrived from Lahore. Soon enough the army came from Lahore, beating back the Afghans. However Hari Singh Nalwa was no more, the lion had passed away. In his death too, he prevented the Afghans  from taking Jamrud and Peshawar.  After Nalwa’s death, Khyber Pass became the frontier of the Sikh Empire, and Ranjit Singh gave up on further conquests.

Nalwa was an equally capable administrator too,  serving as the Governor of  Kashmir, Greater Hazara,  Peshawar at various times.  He often handled the most troublesome spots in the Sikh empire, known for their volatile nature.  As Governor of Kashmir, he enforced the ban on cow slaughter, as ordered by Maharaja Ranjit Singh. He also built many forts, gurudwaras, temples, havelis and sarais, in the places he conquered. The fortified town of Haripur was built by him in 1822, a planned city, with an excellent water distribution system.  He was known for devising an excellent security system for the forts, many Khatri merchants migrated to Haripur, as they found it conducive for trade.  He also built up Gujranwala as a prosperous trading center, and built most of the forts in the Khyber region.  He built the Gurudwara Panja Sahib at the town of Hassan Abdal( now in Pakistan), and donated the gold to cover the dome of the Akal Takht in Amritsar.

I am a 40 year old Blogger with a passion in movies, music,books, Quizzing and politics. A techie by profession, and a writer at heart. Seeking to write my own book one day.
View all posts by Ratnakar Sadasyula →
This entry was posted in Punjab, Sikh History. Bookmark the permalink.