Posted on November 22, 2019 by Ratnakar Sadasyula

One of the most fascinating aspects of Ahom history, has been their long conflict with the Mughals.  While we do known about the long Maratha-Mughal war,  not much is known about  the  long history of Ahom resistance to Mughal rule from 1615 when their kingdom was atttacked by Abu Bakr  to the Battle of Itakhuli in 1682 that saw a decisive Ahom victory, resulting in the Mughal retreat. There were 18 major conflicts between the Ahoms and Mughals, out of which only one in 1663 was a major victory for the latter. In most other conflicts, the Ahoms either routed the Mughals and sent them back, or even if the Mughals won, they could not hold for long on to their gains.

One of the primary factors behind the Ahom-Mughal rivalry was the kingdom that lay to the West, the Cooch Behar princely state. 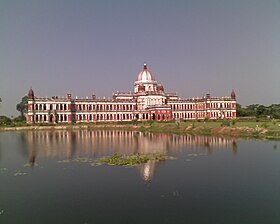 Cooch Behar was formed in 1586, following the breakup of the Kamata Kingdom, one of the older Assamese kingdoms. Earlier under the Khem dynasty, it later came under the Koch dynasty in 1515 with Vishwa Singha being their first ruler. When it’s second ruler Nara Narayan passed away, the kingdom split into two parts, the eastern part was Koch Hajo under Raghudev, his nephew, and the Western part Koch Behar under his son Lakshmi Narayan.  It was this part that allied with the Mughals, right from Jahangir’s time, which was the genesis of the conflict too. When Lakshmi Narayan allied with the Mughals, the Ahom ruler Sukhampaa allied with Koch Hajo, by marrying his son to Raghudeva’s daughter. While Koch Hajo includes the districts of Barpeta, Kamrup, Darrang, Koch Bihar mostly covered Northern Bengal, bordering Bhutan. 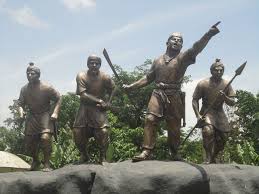 Another factor was the aggressive Mughal imperialism that sought to expand its territory into the North East starting with Assam. The Mughals considered the territory east of Barnadi up to Singri as part of their empire, added to it the rich natural resources of Assam too, especially after the break up of the Kamata kingdom. Kamrup was one of the more prosperous, fertile areas, with it’s elephants, aromatic plants, and the Mughals were determined to have it.

The very first foray the Mughals made into Assam, at Kajali in 1615, was sparked off by the Ahom rulers punishing Ratan Singh, for illegal trade by expelling him.  The Mughals sent an imperial army under Abu Bakr and Raja Satrajit of Bhusna. Though the Ahoms suffered an early loss, they fortified Samdhara, regrouped and managed to drive back the Mughals.  It was a disaster for the Mughals, and in a way would set the pattern for future Ahom-Mughal conflicts also.

For quite some time there was a low key conflict between both of them, with the Mughals preferring to focus on the Kamrup region more.  The Ahoms however continued their hostile policy, as they encouraged the rebels in Kamrup, with Pratap Singha making a rather failed attempt to install Bali Narayan, as the king of Darrang. In 1619 asylum was given to the hill chiefs of Dhanikal fleeing from the tyrannical Bengal subedar Qasim Khan Chisti. Though the Ahoms managed to defeat the Mughal forces and occupy Ranihat, the latter struck back reoccupying Dhanikal.

While there was a brief lull in hostilities, the conflict again rose its head under Shahjahan’s reign. Two factors spurred this, one  was the asylum given by the Ahom king to the hill chiefs of Dhanikal, another was the double game played by Satrajit, who egged on Bali Narayan to capture Kamrup, with Ahom assistance. The attack on Kamrup by Bali Narayan and Ahoms in December 1636, reignited the conflict. And by November 1637, the Mughals managed to occupy Kamrup, in spite of a gallant resistance  put up by the residents of Samdhara fort.

The treaty of Asurar Ali signed in 1639, between the Ahom general Momai Tamuli Borbarua and Allah Yar Khan, saw the entire Western part of Assam, till Guwahati pass under Mughal control. For the first time, the Ahom ruler, formally acknowledged Kamrup as a part of the Mughal Empire, marking it as the Western boundary to his kingdom.  In spite of the peace treaty and acknowledgement of boundaries, regular skirmishes kept breaking out between the Mughals and Ahoms. When Shahjahan fell ill, and his sons were caught in a bloody war of succession, the Ahom king Jayadhwaj Singha, took advantage of it, and chased out the Mughals from Assam, reoccupying the entire Western region till Guwahati.

Aurangzeb on ascending the throne, ordered his Bengal subedar Mir Jumla to recapture Cooch Behar and Assam, establishing Mughal rule in that region. With Koch Behar falling to the Mughals, Mir Jumla entered Assam in 1662. He had a series of successes initially, occupying a whole lot of forts between Manaha and Gauhati. He was also helped by the internal dissensions in the Ahom kingdom, due to Jayadhwaja appointing a Kayastha as viceroy of Western Assam. This decision was not accepted by the dominant Tai-Ahom nobility, who regarded the top posts as their exclusive privilege, leading to disunity among the ranks.

In spite of the Ahoms, regrouping after the Mughal attack on Kaliabor, Mir Jumla easily overran Simulgarh, Samdhara and entered Garhgaon by March 1662. Jayadhwaj Singha, abandoned the capital, taking refuge in the Eastern hills, and the Mughals got hold of a massive treasure, that included  82 elephants, about 300,000 coins in gold and silver, 675 big guns, not to mention 1000 ships. However when the monsoon struck, communications were cut off  with the Mughal fleet at Dhaka and Lakhau.  Also an epidemic broke out at Mathurapur, causing many deaths forcing Mughals to abandon camp there, and neither they could adjust to the climate there.

Taking advantage of the Mughal misery, the Ahoms recovered most of the lost territories except Garhgaon. However with the monsoon easing out by September , communication was re established, roads were available, contact was established with the fleet at Lakhau.  Under constant  attack,  the Ahom ruler Jayadhwaj Singha, sued for peace, and the result was the utterly humilating Treaty of Ghilajarighat in January 1663. Western Assam was ceded to the Mughals, war indemnity of 3 lakh rupees to be paid and the worst of all, he had to send his own daughter Ramani Ghabaru, as well as his niece to the Mughal harem. It was complete humiliation for the proud Ahoms, and Jayadhwaj Singha later died heartbroken.

“My ancestors were never subordinate to any other people; and I for myself cannot remain under the vassalage of any foreign power. I am a descendant of the Heavenly King and how can I pay tribute to the wretched foreigners”

However Jayadhwaj’s succesor Chakradwaj Singha, swore to avenge the humiliation, and refused to pay any indemnity. “Death is preferable to a life of subordination to foreigners”, he defiantly proclaimed, and in 1665 summoning an assembly of nobles, he made it clear that the Ahoms would no longer accept Mughal rule and ordered measures to drive them out from Western Assam.

When Syed Firoz Khan, the new Faujdar at Gauhati, demanded him to pay up the money, Chakradwaj made up his mind, and launched an atack. Sailing down the Brahmaputra in two divisions, in August 1667, the Ahoms encamped at Kaliabor, which they would use as the base to launch operations from.  By November 1667, Itakhuli was recaptured along with Gauhati, and the Mughals were chased down to the Manas river, that formed the boundary. They also managed to free many of the Assamese who were taken into captivity by Mir Jumla. When he heard the news of the victory, Chakradwaj proudly said

The Ahoms managed to recapture most of their old territory, which would make Aurangzeb send a huge army that would result in the epic battle of Saraighat.

Blogger with a passion in movies, music,books and history. A techie by profession, and a writer at heart. Author of City of Victory a book on Vijayanagar Empire
View all posts by Ratnakar Sadasyula →
This entry was posted in Ahom History, Assam, Medieval India, Uncategorized. Bookmark the permalink.