The final part of my series on Mewar, looks at one of it’s greatest heroes ever, a man who was a legend by himself, whose very tale is that of valor and sacrifice. Maharana Pratap. 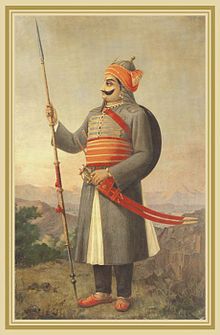 What do you make of a man who refused to bow before the mighty Mughal emperor Akbar, when all other Rajput rulers did?  When his own brothers sided with Akbar, leaving him virtually alone? Of a man, who preferred to face hardships in the jungles of Aravalli, than live a life of comfort, by surrendering to Akbar. It is not without reason, that Maharana Pratap or Rana Pratap is regarded as one of the the greatest heroes of India. Here was some one proudly independent, fearless in spirit, and yes a great warrior too.  In my previous posts on Mewar, I had examined how Pratap was the more well known inheritor of a rich legacy. A legacy that boasted of Rana Kumbha, a ruler whose vision, of building a protective network of forts, saw him come up with the Great Wall of India. A legacy that boasted of Rana Sanga, under whose rule Mewar expanded all over the North, before he was treacherously back-stabbed by one of his own. A legacy of a nursemaid called Panna Dhai, who sacrificed her own son for the future of Mewar.  Of Jaimal and Patta who fought to the end, during Akbar’s siege of Chittorgarh.

Rana Pratap took over as ruler of Mewar, in not exactly the best of circumstances. He had to fight a bitter succession battle, against his brother Jagmal to become the ruler. But more than anything else, he grew up listening to tales of his father deserting Chittorgarh, after Akbar laid seige to it.  Of how Akbar, devastated Chittor after capturing it, massacred it’s inhabitants,  mounted their skulls in a heap. There was no way Rana Pratap would have ever surrendered to Akbar, after listening to the horrors wrought on the inhabitants of Chittorgarh.  The other Rajput rulers of Marwar, Amber, Bundi, had accepted Akbar’s sovereignty, even forged alliances with him, but Pratap stood out defiantly.  For him to surrender to Akbar, would have meant insulting the sacrifice of Jaimal and Patta. It would have meant an insult to the souls of the thousands massacred after Akbar conquered Chittorgarh. And thus Chittorgarh became the ambition of his life, for him it was not just a fort, it was the very honor of his ancestors. His father Udai Singh had come to terms with the loss of Chittorgarh, and eventually founded a new city Udaipur, named after himself. But to Pratap, as long as Chittorgarh would not be recaptured from the enemy, he could never rest.

It was in keeping with this vow, that Pratap imposed an austerity regime of sorts, till Chittorgarh was recaptured.  Food was to be eaten only in leaf plates, no gold or silver vessels.  Beards were not to be trimmed, and they would sleep only on straw mats, till Chittorgarh was regained. He ruled for some time from Kumbhalgarh, as well as strengthening the mountain fortress of Gogunda.  Pratap however had to be fighting a lonely battle. The kingdom of Amber under Man Singh had already submitted to Akbar, and he would later be one of the Mughal Emperor’s close confidantes.  Maldeo of Marwar, who earlier had repelled Sher Shah Suri,  was compelled to follow, and submitted to Akbar.  Two major states, Marwar and Amber had surrendered to Akbar, most of the minor Rajput chieftains, who neither had the clout nor power to oppose the Emperor, surrendered too.

Akbar tried his best to bring over Rana Pratap to his side.  Even his own brothers Jagmal, Sagar, Shakti Singh had moved over to the Mughal camp. Akbar sent missions under Bhagwan Das, Todar Mal, and finally with Raja Man Singh, but to no avail. In fact when Man Singh met Pratap, the latter refused to even dine with him, stating he could not with some one who sold his soul to the enemy.  Man Singh was also related to Akbar, his sister was given in marriage to the Emperor, something which Pratap mocked at.  Exasperated with what he saw as Pratap’s insolence, Akbar knew there was no other option but war now.

A narrow mountain pass n the Arravallis located around 40 Km from Udaipur, connecting the districts of Rajsamand and Pali. Haldighati is believed to have got it’s name from the turmeric colored soil here. It was to be the venue of one of the greatest battles ever fought in Indian history.  Though most Rajput rulers were on the side of the Mughals, Pratap still had a formidable force, that included Ram Singh Tanvar of Gwalior with all his sons, the descendants of Jaimal and Patta, an Afghan contingent led by Hakim Khan Sur, and a Bhil contingent led by Rao Poonja. Hakim Khan was a descendant of Sher Shah Suri, and for him this was an occasion to seek revenge against the Mughals.  Ram Singh was deposed from the throne of Gwalior by Akbar, and it was only Mewar that had given him refuge.  Pratap had a 3000 strong cavalry, 2000 infantry, 100 elephants and 100 lancers.

On the other hand, the Mughal Army was huge, with a strength of 80,000 led by Akbar himself, followed by Man Singh, Prince Salim, Bahlol Khan, Multan Khan.  Haldighati was the only way to the plains, and who controlled it, had the strategic advantage. Though Pratap was outnumbered by the Mughal Army, he took over the surrounding hills, and on one side the Bhil tribals were stationed in the crevasses with their bows and arrows, ready to throw down rocks too. Pratap was stationed in the center, along with his minister Bhamashah, while Hakim Khan Sur led the front formation, Jhala Mansingh flanked the left, Ram Singh Tanwar on the right. And above all there was Pratap’s faithful horse Chetak, a Kathiawari breed war horse, that served it’s master well.

18 June, 1576, the armies clashed at Haldighati. With the hilly terrain proving to be an obstacle for artillery, the pitched battle was primarily between the infantry and cavalry. This was to the advantage of the Rajputs, as a massive attack, almost decimated the right and left flanks of the Mughal Army. However news of Akbar’s arrival, made the Rajputs retreat to the hills for some time. Pratap once again led from the front, his crimson banner fluttering proudly. And following him, were Jhala, Hakim Khan, Ram Singh straight into the ranks of the Mughal Army.  A pitched battle was fought between Rana Pratap and Man Singh, with the latter having to retreat.  Pratap then charged at Prince Salim on the elephant, and almost had him at his mercy, before the javelin, just missed the mark, killing the mahout. The battle now reached a feverish pitch, with neither side willing to yield, and the soil of Haldighati was soaked red with blood.  Pratap himself was rescued thrice, but the Mughals now were gaining an upper hand, thanks to their artillery power.  Jhala, understanding the gravity of the situation, urged Pratap to retreat from the battle field. He himself wore Pratap’s insignia, his helmet and charged into the Mughal ranks. Jhala fought like a cornered tiger till the end, before breathing his last. Man Singh was shocked to see that the man killed was not Pratap, but his own chieftain Jhala.

In the meantime Rana Pratap, was riding into the hills, pursued by the Mughal soldiers. His loyal horse Chetak, bore his master, over the treacherous passes and streams, inspite of being injured badly. Chetak took his master into the safety of the jungles, but succumbed to it’s injuries.  It was a total rout at Haldighati, Pratap had lost 500 of his own kin, only 8000 of his 22,000 strong force survived. Ram Singh of Gwalior perished in the battle along with all of his sons. For some time Pratap took refuge in the hills, before recapturing Kumbhalgarh again. However Akbar using a mix of treachery and a long siege once again captured Kumbhalgarh, while Man Singh captured the mountain fortress of Gogunda. Udaipur was captured by Mohammed Khan, while Farid Khan took over  Chanond.  Pratap was now essentially a fugitive with no place to call his own,  and moved with his family from hill to hill, from valley to valley, living on the verge of starvation in the jungles.

Yet Pratap’s resolve remained unshaken, and all the suffering did not make him reconsider his decision of not submitting to Akbar. However when one of his children fainted due to hunger, and his wife began to feel insecure, Pratap’s resolve was shaken for the first time. He sent a letter to Akbar, signalling his willingness to surrender.However one of Pratap’s staunchest admirers Prithviraj,  sent a letter to him, stating that he should never bring disrepute to Mewar.

The hopes of the Hindu rest on the Hindu ;yet the Rana forsakes them. But for Partap, all would be placed on the same level by Akbar ; for our chiefs have lost their valour and our females their honor.

This once again bought the spirit back to Pratap, and he vowed to rather die than surrender to Akbar. He resisted the Mughal Army that had come to take him, and when  all seemed to be lost, the Bhils once again came to his rescue, routing the Mughal contingent. And they also sheltered Pratap and his family too. However he still lacked the resources to fight against the Mughals. He had lost almost everything at Haldighati.

It was at this stage, that Pratap’s minister Bhama Shah, came to his rescue. Bhama Shah, was one of the wealthiest men in Mewar, accumulated over generations of service by his family to the throne of Mewar.He put all his wealth at Pratap’s disposal, saying it was needed more than ever for the liberation of Mewar. Soon Pratap once again, managed to raise an army, and resources with the help of Bhama Shah. Around the same time, the Mughals too were caught up with revolts in Bengal, leaving Mewar free for Pratap to recapture. Akbar himself was caught up in the North West,  and Pratap made best use of the opportunity. Soon Pratap recaptured the forts one by one, Kumbhalgarh, Gogunda,  Udaipur, Ranthambore. He also built a new capital of Chavand near Dungarpur. He succesfully used the guerilla tactics against the Mughals, and recaptured most of Mewar back. However Pratap’s dream of capturing Chittorgarh, still remained elusive. He died at his capital of Chavand, in 1597, still nursing dreams of his beloved Chittorgarh. And thus ended the life of one of India’s greatest heroes ever.

I am a 40 year old Blogger with a passion in movies, music,books, Quizzing and politics. A techie by profession, and a writer at heart. Seeking to write my own book one day.
View all posts by Ratnakar Sadasyula →
This entry was posted in Mewar, Rajputs and tagged Akbar, Man Singh, Mewar, Rana Pratap. Bookmark the permalink.