Posted on August 18, 2018 by Ratnakar Sadasyula

When one looks at the history of the Maratha Empire, the Peshwa era is one of the most significant one, specifically from Balaji Vishwanath(1713-1720) to  Raghunath Rao(1773-74), before Nana Fadnavis effectively became the defacto power behind the throne. Technically speaking Peshwa was equivalent to the Prime Minister in the Maratha Empire,  starting out as subordinates to the Chattrapati, in later years they became the actual ruling power, starting with Balaji Vishwanath. Technically speaking Moropant Pingle,  Shivaji’s revenue minister, was the first ever Peshwa, though Shivaji referred to him as Pant Pradhan.  The rise of the Peshwa was more an effect of the internal conflict between Tara Bai and Shahu, and the latter’s victory saw him appointing Balaji Vishwanath as the Peshwa.  It also marked the ascendancy of the Chitpavan Brahmins, Vishwanath played a major role not just in Shahu’s victory over Tarabai, but also the battles against Aurangzeb, that left the Mughal emperor totally broken and dispirited.  And later on supported the Sayyid brothers in deposing the Mughal emperor Farrukshiyar.

Baji Rao was born into the Bhat family on August 18,  his younger brother Chimaji Appa, would prove to be an equally renowned warrior. He grew up in Saswad, now a suburb of Pune and their family’s personal fiefdom too. Accompanying his father on various military campaigns, made Baji Rao, a battle hardened warrior in his teens itself. And when his father passed away in 1720, Shahu appointed Baji Rao I as the Peshwa, he was just 20.  It was not a bed of roses for him, for starters most of the senior officials at court, like Anant Ram Sumant, Shripatrao Pratinidhi, did not take too kindly to his appointment. The fact that they were senior to him, and overruled by him, added to the resentment further.  Baji Rao, hit back, by appointing younger people, like Malhar Rao Holkar, Ranoji Shinde, the Pawar Brothers, most of them barely out of their teens. More important they were not from the powerful Deshmukh clans, that traditionally dominated the Maratha court.  Holkar was a Dhangar,  Ranoji Shinde was a village Patil, the Pawar brothers were Marathas not related to the Deshmukh clans.  \

On the other hand,  the influence of the Maratha Empire was not as pervasive as it was earlier. The Siddis of Janjira controlled the Konkan coast, the nobles in the newly gained territories of Malwa and Gujarat were a law unto themselves, while former Mughal Governor Asaf Jah I,  broke away and founded the Nizam dynasty. And then you had Sambhaji II of Kolhapur staking his claim for being the Chattrapati, getting into a fight with Shahu.  Basically the Marathas were split among the rival camps of Satara and Kolhapur, much to the advantage of Nizam-Ul-Mulk.  Baji Rao, felt that only a Hindu Pad Padshahi was the solution to the internal rivalries, and for that the Maratha empire had to expand beyond the Deccan. With the Mughal Empire shrinking and in terminal decline, he felt it was the right time for the Marathas to occupy the space.

“Let us transcend the barren Deccan and conquer central India. The Mughals have become weak, insolent, womanizers and opium-addicts.  It is time to drive from the holy land of Bharatvarsha the outcastes and the barbarians. Let us throw them back over the Himalayas. Strike, strike at the trunk and the branches will fall off themselves. Listen and I shall plant the saffron flag on the walls of Attock.”

Again, though most of the Maratha Sardars were opposed to Baji Rao’s idea of expansion beyond Deccan, Shahu gave him the go ahead. And that began, a 20 year campaign towards North, where Baji Rao 1 struck terror into the hearts of his enemies.

Campaign against the Nizam

Baji Rao initially met the Nizam at Chikalthana, on January 4, 1721 to settle the disputes peacefully. He in fact initially supported the Nizam in his revolt against the Mughal emperor, and carving out his own kingdom in the Deccan. However the Nizam responded by clearing out all the Maratha revenue collectors, and he also took good advantage of the internal rivalry among the Marathas between Shahu and Sambhaji II, by refusing to pay chauth or sardeshmukh.  In the meantime the likes of Parashuram Pratinidhi and Chandrasen Jadhav, who had no love lost with the Bhat family, began to support the Nizam and Sambhaji II, against Shahu.  The Nizam in the meantime invaded Pune and installed Sambhaji II as the Chattrapati.  Baji Rao struck back, and in the Battle of Palkhed,  on February 28, 1728 routed the Nizam using  a series of lightning fast attacks, that left the Nizam totally clueless. Years later, Field Marashal Bernard Montogomery called this “A Masterpiece of strategic mobility” in his book A History of Warfare. In fact he rated Baji Rao on par with the US Civil War General Sherman, in usage of the light and fast attack tactics. The Nizam was forced to sue for peace, recognized Shahu as the true Chattrapati as well as the Maratha’s right to collect taxes in the Deccan.  Baji Rao also moved to Pune in 1728, and laid the foundations for what was to become a great city.  The construction of the iconic Shaniwar Wada began during his time. 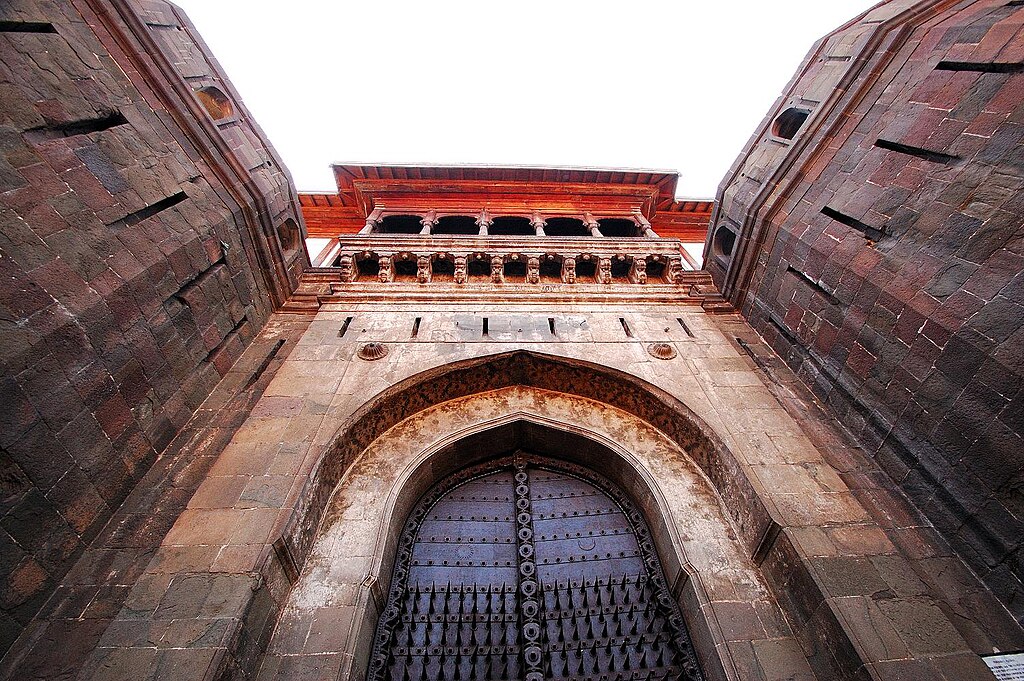 Malwa was easily ovverun by Baji Rao 1 in 1723, with help of Malhar Rao Holkar, Shinde, Pawar brothers, who established their own kingdoms later.  While Holkar ruled from Indore,  Shinde founded the Scindia dynasty in Gwalior, while the Pawar brothers would found the kingdoms of Dewas and Dhar.  He also foiled an attempt by the Mughal emperor to recapture Malwa, routing his army at the Battle of Ajmehra, aided by his brother Chimaji Appa, and able generals like Holkar, Shinde and the Pawar brothers.  By February 1729, the Marathas had captured the entire Malwa and reached the southern part of Rajasthan.  He also avoided direct conflicts with the Rajputs unlike his predecessors and ensured friendly relations with most.

One of Baji Rao’s biggest victories was against the Mughal general Bangash Khan, when he came to aid of Veer Chhatrasal, the Bundelkhand ruler who had carved out his own kingdom. Surrounded by the Mughals and Rohillas,  Chhatrasal pleaded with Baji Rao 1, “Jo gati bhayi Gajendra ki, wahi gati hamri aaj, baaji jaat bundel ki baaji raakhiyo laaj”, a reference to the Gajendra Moksham story, where the elephant pleads with Vishnu to help him.  He made a lightning strike on the Mughal Army, Bangash Khan fled from Bundelkhand, and Chattrasal was restored as the ruler, who in turn out of gratitude ceded a large amount of territory to Baji Rao 1, and also gave his daughter Mastani from a Muslim mistress to him.

Trimbhak Rao, the senapati  of Chattrapati Shahu from the Dabhade clan, had virtual monopoly over Gujarat, and felt threatened by Baji Rao gaining control over his fiefdom. He allied with other Maratha sardars in Gujarat, and Bangash Khan, as well as the Nizam and Sambhaji II. However the entire alliance was once again routed by Baji Rao at the Battle of Dabhol, Trimbhak died on the battlefield.  The long standing dispute with Sambhaji II was resolved by the Treaty of Warna in April 1731, which demarcated Satara and Kolhapur, while the Nizam too promised not to interfere with the Maratha campaigns.

The Siddis of Janjira had grown rapidly post Shivaji’s death and were in full control of the Konkan coast. When a war of succession broke out in 1773 among the sons of Yakut Khan,  Baji Rao supported one of the sons Abdul Rehman, and later signed a peace treaty with the Siddis, giving them control over Janjira, Underi while the Marathas would keep Raigad, Rewas with them. However when the Siddis began to attack the Maratha territories in Konkan, Baji Rao sent his brother Chimaji Appa, who launched a surprise attack at Rewas and routed the Siddis, forcing them to sue for a peace treaty.

Baji Rao’s final push was to the seat of the Mughal power itself, Delhi, when he sent an army under Malhar Rao Holkar, Pilaji Jadha, when he began the march on November 12, 1736.  The Marathas under Holkar marched right up to Delhi, capturing the entire Doab region, and on March 28, 1737  decisively routed the Mughal army at the Battle of Delhi.  The Mughal Emperor’s plea to Nizam and the Nawab of Bhopal was in vain, as the combined forces were once again routed in the Battle of Bhopal on December 24, 1737. Nizam-Ul-Mulk was forced to ceded the entire Malwa to Marathas, and the Mughals had to pay indemnity, a total victory for Baji Rao 1. Chimaji Appa also ran a succesful campaign against the Portuguese on the West Coast, defeating them in a pitched battle at Vasai,  as well as capturing Salsette and Ghoribunder fort.

Finally on April 28, 1740 Baji Rao 1 passed away near Khargone, but he had taken the Maratha Empire to the greatest heights ever. If one has to see the effect of Baji Rao a look at the two maps below tell it all.

I am a 40 year old Blogger with a passion in movies, music,books, Quizzing and politics. A techie by profession, and a writer at heart. Seeking to write my own book one day.
View all posts by Ratnakar Sadasyula →
This entry was posted in Marathas, Peshwas, Uncategorized. Bookmark the permalink.