Posted on November 21, 2018 by Ratnakar Sadasyula 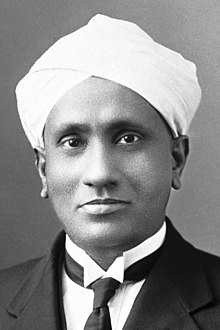 1930, Stockholm- The 42 year old dark skinned, Indian stepped on to the stage to receive the Nobel Prize for Physics from King Utsav. With his turban and dark skin he stood out in a sea of white faces.  As he looked around the auditorioum and the applause,  he realized that he was sitting under the Union Jack.  And that his nation, India did not even have a flag of her own, that made him break down.

“C.V. Raman was the first to recognize and demonstrate that the energy of photon can undergo partial transformation within matter. I still recall vividly the deep impression that this discovery made on all of us….”- Albert Einstein

That man was none other than Chandrashekhar Venkata Raman, or C.V.Raman as he was popularly known. The first Indian to have won a Nobel in Physics, and the only Indian citizen to have won it. The others Hargobind Khorana,  Subramanya Chandrashekhar( his nephew incidentally) and Venkataraman Ramakrishnan were born in India, but won for their work as US citizens. He was also the first Asian to get the Nobel Prize in Science, for his Raman Effect, which experimentally demonstrated that the light-quanta and molecules do exchange energy which manifests itself as a change in the colour of the scattered light.  It was one of the most convincing proof for quantum theory of light. And it was not just physics, he published around 475 papers on topics ranging from astronomy to metereology to physiology. His work on the mridangam, bought to light the accoustical knowledge possesed in ancient India.

The genius was born on November 7, 1888 in a small village Thiruvanaikaval  near Trichy on the banks of the Kaveri. His maternal grandfather Saptarishi Sastri was a renowned Sanskrit scholar, and his parents were  R. Chandrasekhara Iyer and Parvathi Ammal.  Raman studied for some time in Vishakapatnam at the St.Aloysius High School , where his father was mathematics lecturer at the AVN College here. In 1903 he joined the prestigious Presidency College in Chennai, where he topped both the BA and MA exams, won the gold medal in Physics. While he was a naturally brilliant student, some books influenced him much more. One was Edwin Arnold’s The Light of Asia on Gautama Buddha, that infuenced him spiritually. Euclid’s Elements kindled his interest in geometry and  Hermann von Helmholtz.’s The Sensations of Tone on music and musical instruments.

Inspite of his brilliance in science, he was not encouraged to take up science as a career, and on his father’s insistence took the Financial Civil Services exam. He stood first and joined as an Assistant Accountant General at Kolkata in 1907, in the Indian Finance Department. However when he chanced on the Indian Association for the Cultivation of Science( IACS), he joined it enthusiastically, after meeting the Secretary Amritlal Sircar. IACS was actually set up by his father Mahendralal Sarkar, one of the brighest minds of his time, and only the second one to get an MD from Kolkata University, and started the association for the propagation of science and inculcate a culture of research.

Raman often referred to his period at IACS as the golden phase of his career. Working with very limited equipment and that too in his spare time, he managed to get his research findings published in journals like Nature, Physics Review. He did his research primarily on accoustics, studying many musical instruments like tabla, mridangam, violin.  He published a monograph on the violin titled “On the Mechanical Theory of Vibrations of Musical Instruments of the Violin Family”.

“For the Chair of Physics created by Sir Taraknath Palit, we have been fortunate enough to secure the services of Mr. Chandrasekhara Venkata Raman, who has greatly distinguished himself and acquired a European fame by his brilliant research in the domain of Physical Science, assiduously carried on under the most adverse circumstances amidst the distraction of pressing official duties. I rejoice to think that many of these valuable researches have been carried on in the laboratory of the Indian Association for the Cultivation of Science, founded by our late illustrious colleague, Dr. Mahandra Lal Sircar, who devoted a lifetime to the foundation of an institution for the cultivation and advancement of science in this country. I should fail in my duty if I were to restrain myself in my expression of genuine admiration I feel for the courage and spirit of self-sacrifice with which Mr. Raman had decided to exchange a lucrative official appointment with attractive prospects, for a University Professorship, which, I regret to say, does not carry even liberal emoluments. This one instance encourages me to entertain the hope that there will be no lack of seeker after truth in the Temple of Knowledge which it is our ambition to erect.- Ashutosh Mukherjee

In 1917, he was invited by Ashutosh Mukherjee, then VC of Kolkata University, to join as a Palit Professor of Physics in the newly established Science College. Raman happily accepted the offer, even though it was less than what he was getting in the Government service. Though his position did not entail any teaching and was primarily research oriented,  Raman being a born teacher, taught in the Science classes.

The by now famous Raman Scattering effect was discovered by him in 1928, along with another scientist K.S.Krishnan.The Raman Spectroscopy based on the Raman Effect, is a technique used to observe vibrational, rotational modes in a system. This actually happened during a voyage to Europe in 1921, when he noticed the very blue color of Mediterranean Sea. He carried out experiments regarding scattering of light, using monochromatic light from a mercury arc lamp. He detected lines in the spectrum, and presented his theory to other scientists.

He in fact was confident of winning the Nobel for Physics in 1928 itself for his work on spectroscopy. And was quite disappointed when he found out that he had been bypassed. He would however win the Nobel for Physics later in 1930, for his work on Scattering of Light, becoming first Asian scientist to do so. Apart from his discovery of scattering of light, he, did notable work in other areas too.

Along with Suri Bhagavantam, Raman discovered Quantum Photo Spin in 1932, later worked on accoustics of musical instruments. He was one of the first to investigate harmonic nature of the sound in the tabla and mridangam. He worked out the theory of transverse vibration of bowed strings, and also investigated the propagation of sound in whispering galleries. Along with his student Nagendra Nath, C.V.Raman provided the explanation for accousto-optic effect,resulted in Raman-Nath theory.

He also continued his research work at the IACS laboratories, and he later became it’s Hon Secretary in 1919. However in 1933, he left for Bangalore to become the first Indian director of IISc, as well as the head of it’s Physics Department. Raman established a new physics department at IISc, a central workshop for fabricating precision instruments and he also set up beautiful flower gardens in the campus. One of his students would be the notable G.N.Ramachandran, who would do pioneering work on the peptide structure.  He carried out studies on diffraction of light by ultrasonic waves and effects of X-Rays on infrared vibrations in crystals.

Appointed as India’s first national professor, he did indepth studies on the structure and properties of diamonds, and optical behavior of iridescent substances like agate, opal and pearls. However accusations against him of favoring the Physics Department at IISc over others, made him step down from the Director’s post, though he continued as Head of Physics department till 1948 when he retired.

You know, I was to retire at 60. So two years before my retirement I started building this institute so that on the day I retired I took my bag and walked right into this institute. I can not remain idle for a single day

After retirement he worked on establishing the Raman Research Institute in Bangalore, investing all his life’s savings including the Nobel Prize winning amount. The land was gifted by the Mysore Maharaja. Short of funds, he  started  a company called Travancore Chemicals and Manufacturing that manufactured Potassium Chlorate for the matchstick industry.  With 4 factories and a good dividend, he managed to earn enough to support his Institute financially. He also founded the Indian Academy of Sciences Bangalore, in 1934, to discuss on scientific research and symposia on subjects.

In the past, India had shown her greatness in the fields of scholarship, philosophy and science but today, we are helplessly dependent on Western countries for knowledge of science. India should not be a camp-follower but a leader in science. It is no use getting our ideas from the west. We have to think out our problems and find the solutions to them.

While Raman believed that Science was the solution to most of India’s problems, he felt that India should not be dependent on others for ideas.  He encouraged the Indian youth not to lose spirit and courage, a spirit of victory that would give us our rightful place.

I can assert without fear of contradiction that the quality of the Indian mind is equal to the quality of any Teutonic, Nordic or Anglo-saxon mind. What we lack is perhaps courage, what we lack is perhaps driving force which takes one anywhere. We have, I think, developed an inferiority complex. I think what is needed in India today is the destruction of that defeatist spirit. We need a spirit of victory, a spirit that would carry us to our rightful place under the sun, a spirit which will recognize that we, as inheritors of a proud civilization, are entitled to a rightful place on this planet. If that indomitable spirit were to arise, nothing can hold us from achieving our rightful destiny.

He had a very holistic view of science, and felt nature had the best answers for it. He was also an ardent follower of Mahatma Gandhi, instituted the Gandhi Memorial Lecture in the Raman Research Institute. On November 21, 1970 he passed away at the age of 82. But not before leaving a rich legacy. The Physics Department at University of Kolkata and IISC were both the products of his hard work and dedication. And he was a great institution builder too, from Raman Research Institute to IACS, and being one of the founders of the Indian Science Congress.

Let us try to make our universities the best–we should not be satisfied with anything less than the best. What will be the result? Instead of a great many of our young men going out of the country, they will remain here and strive to advance our reputation and that will make us strive for more and more good things.

Blogger with a passion in movies, music,books and history. A techie by profession, and a writer at heart. Author of City of Victory a book on Vijayanagar Empire
View all posts by Ratnakar Sadasyula →
This entry was posted in Great Indians, Science in India. Bookmark the permalink.