Posted on September 28, 2015 by Ratnakar Sadasyula

This is basically a two part series on Bhagat Singh, this deals with his early years for details related to his trial and execution check here https://historyunderyourfeet.wordpress.com/2015/03/23/shaheed-bhagat-singh-the-trial-and-the-execution/ 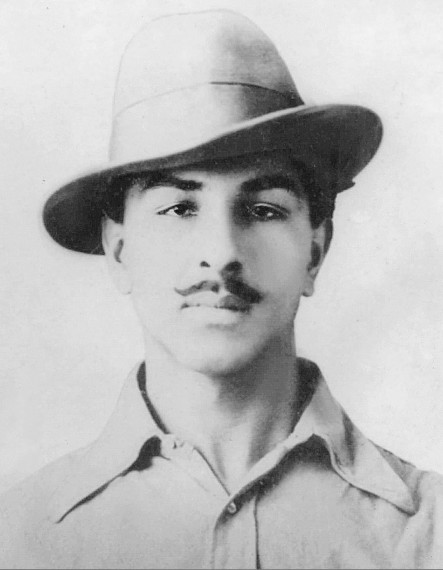 The young boy of just 12, stood on the ground, as he looked out. Just some days earlier, around 1500 Indians were massacred in cold blood by the British forces on this very ground. A massacre so ghastly, so sadistic, that it shook the very conscience of a civilized world. The young boy, picked up the soil, that was mixed with the blood of those people, the blood of martyrs, and that very moment itself he made a resolve, to uproot the British rule from India. The young boy was Bhagat Singh, and that place was the Jallianwala Bagh. It would prove to be the making of one of the great revolutionaries.

Bhagat Singh was descended from a family of Khalsa Sardars, who had fought in Maharaja Ranjit Singh’s army against the Pathans, and helped the empire to expand. For this contribution, they were awarded with a large piece of land. His grandfather Sardar Arjun Singh was a landlord himself, who choose to oppose the British, and that nationalism in a way came down to Bhagat. Arjun Singh had 3 sons- Ajit Singh, Swaran Singh and Kishen Singh, all of whom were noted for their nationalism and integrity. Ajit Singh, who was his paternal uncle, took an active part in the agitation led by Lala Lajpat Rai, and he was imprisoned under the draconian Regulation III of 1818. Bhagat Singh’s father Kishan Singh, and his other uncle Swaran Singh, too were arrested for acting against the British, and the latter died in prison. Bhagat Singh, was born on September 28, 1907, coincidentally, the same time his uncle had died. The nationalist spirit in Bhagat Singh was something he had inherited from his family, his ancestors.

When he was just 14, Bhagat Singh was inspired by the Babbar Akalis, a group that advocated violent revolution as the only way out for independence. His father Kishen Singh, too helped out these revolutionaries actively, by means of money and other support. When the cops cracked down on the Babbar Akalis, Bhagat fled to Kanpur , where he came in touch with Ganesh Shankar Vidyarthi, with whom he would later have a life long friendship too. It was a critical time in the history of the freedom struggle. The planned Ghadar uprising by Rash Behari Bose, Sachin Sanyal had failed. ( See here  for more details  https://historyunderyourfeet.wordpress.com/2015/05/29/rash-behari-bose/ ), and the revolutionary movement was scattered all over. While Mahatma Gandhi managed to capture the minds of freedom fighters, many were disappointed when he called off the Non Cooperation movement after Chauri Chaura. It was under such circumstances that Ram Prasad Bismil, Sachindranath Sanyal founded the Hindustan Republican Association in 1925. With Kanpur being the Headquarters, Bhagat Singh joined the organization, under the mentorship of Jogesh Chatterjee. With the British again cracking down on the revolutionaries after Kakori conspiracy in 1926, Bhagat again went back to Lahore.

The period between 1925-26 is when Bhagat began to build up his intellectual thought and knowledge. He joined the National College founded by Lala Lajpat Rai, and studied history, politics and economics in depth. Along with Sukhdev Thapar and Bhagawati Charan, he formed a study circle and with the help of the Servants of People Society, got access to the Dwaraka Das library. The revolutionary movements in Russia, Ireland and Italy were the inspiration to Bhagat and his friends. It was not just books, he also reached out to under trials, clandestinely met other revolutionaries. He also showed that he was a great organizer after 1926, when the Hindustan Republican Association was in a disarray following the crackdown after Kakori. With most leaders in prison, he began to reorganize the party, along with Kumar Sinha and Sukhdev in UP and Punjab.

The hanging of Ram Prasad Bismil, Ashfaqullah, Roshan Singh and Rajendra Lahiri for the Kakori conspiracy, had awakened the youth, they were furious at this blatant injustice. In such a scenario, Bhagat felt it was necessary to revitalize the party, and he toured UP, Bihar and Punjab extensively in 1927 for this purpose. However he was arrested in Lahore, for his alleged involvement in a bomb blast during a Dussehra mela in 1926, and for some time he was even put in solitary confinement. He however came out on bail later, but used this period to organize the Nau Jawan Bharat Sabha, and also began to celebrate the “Kakori Day” in memory of those hanged. The Nau Jawan Sabha, became a foremost organization for the youth of Punjab, and he also began to deliver lectures on the Sikh youth who laid down their lives in the Lahore conspiracy cases of 1915 and 1916. Contrary to popular opinion, Bhagat Singh was not really a believer in violence, or terrorism, for him it was the last resort. He believed that awakening people was the only way ought, and that both economic as well as political freedom were needed. He was influenced by socialism, and the Russian revolution was his inspiration.

He now decided it was time to galvanize HRA, that was in a state of hibernation and a meeting was held at Kanpur in July 1928. Representatives came from Punjab, UP, Bihar, Bengal, Rajasthan, and Bhagat Singh emphasized a socialist ideology. Violence would be used only as a last resort, and the emphasis was more on awakening people and mass action. He also changed the name from Hindustan Republican Association to Hindustan Socialist Republican Association( HSRA), and the organization would be divided into 2 groups- the active members and the supporters. The active group was involved with the task of collecting arms and ammunition, and indulging in mass action, while the supporters would collect funds, shelter revolutionaries and carry on the propaganda. Bhagat himself was a part of the Central Committee, the Headquarters was now established at Jhansi in charge of Kundan Lal, while Chandrashekhar Azad headed the active group. It was also decided that the active members also called the HSR Army, would cut off all connections with family members, and avoid any religious symbols. This was why Bhagat cut off his hair, and shaved to disassociate himself from Sikhism.

HSRA was now shifted to Agra, where the members had to struggle through a life of hardship and want, yet they never gave up on their goal. A small library was also built up in Agra, and at the same time, Bhagat studied deeper and deeper on Socialism. Around the same time, Lala Lajpat Rai was grievously injured in a lathi charge during a protest against the Simon Comission. Lalaji died on Nov 17, 1928 due to the wounds he got from the lathi charge, and many held the then Sr.Superintendent of Police in Lahore, Mr. Scott and the Asst. Superintendent of Police, Saunders to be responsible.   Saunders was shot dead on Dec 17, 1928, as a revenge and posters appeared all over the city stating “Saunders is dead, Lalaji is avenged”. With the police now cracking down again, after Saunders murder, Bhagat Singh had to go into hiding with Azad and Rajguru. However the trio escaped from Lahore, with Bhagat disguised as a British gentleman, Rajguru as his orderly, while Chandrashekar Azad, slipped past as a Brahmin pundit headed towards Mathura.

Bhagat now began to reach out to the revolutionaries in Bengal, to establish a connection as well as to coordinate the armed revolution better. However the Bengal group, differed with Bhagat’s socialist outlook, though both had the same interest, the freedom of the nation at heart. He also established a new branch of HSRA at Kolkata, which was in charge of a Bihari member, and around the same time learnt how to make bombs too. Soon with the help of the experts, Agra, Saharanpur and Lucknow began to emerge as bomb manufacturing centers, and some of them were tested at Jhansi too. Ironically it was one of those who would betray Bhagat Singh to the British.

I am a 40 year old Blogger with a passion in movies, music,books, Quizzing and politics. A techie by profession, and a writer at heart. Seeking to write my own book one day.
View all posts by Ratnakar Sadasyula →
This entry was posted in Hindustan Republican Socialist Army, Indian History, Modern India, Revolutionary Movements and tagged Bhagat Singh, Chandrashekhar Azad, HSRA, Lala Lajpat Rai, Rash Behari bose. Bookmark the permalink.